Milton was born in London on December 9, 1609 as the son of a wealthy notary. He was educated at St. Paul's School. Milton received a Masters degree from Cambridge University in 1632.

In 1638, he undertook a European tour where he met many of the major thinkers of the day, especially in Italy. On his return to England, Milton became a Puritan, and an opponent of the Catholics and of the Stuarts. He was also an ardent polemicist, a follower of Cromwell, and the latter's foreign language secretary.

After the restoration of the Stuarts he suffered considerable persecution. He withdrew from active participation in politics and concentrated on his poetry. 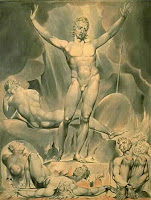 The most unusual aspect of Paradise Lost is the gentle treatment and breadth of understanding given to Satan in his revolt against the tyranny of heaven.

Milton was from an intensely religious age with great splits between Catholic and Protestant thought. People paid for their religious beliefs with their lives. The process of healing these rifts led to the Enlightenment and the idea of the individual being able to worship as they choose and that government would not be involved with religious practice which came to its full flowering in the U.S. Constitution.

Today with the rise of the religious right we are on our way back to that age of religion ruling public policy. The founding fathers would not be pleased, but the devil might.
Posted by Durward Discussion at 5:32 PM