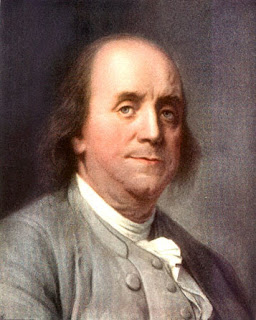 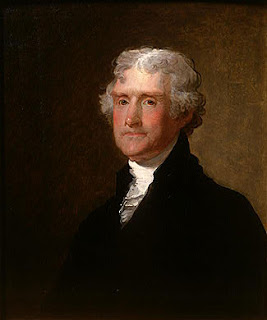 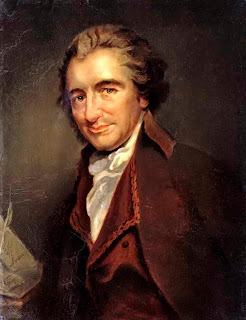 This event happened in April and it has taken me a while to get around to commenting due to other things buzzing through my head.  Since this is a very old bee in my bonnet, I figured it could wait.  I hope someone has gotten hold of Congressman Forbes, his aides, advisors, and constituents to let him and them know that someone really, really needs a history lesson. When you hear assertions that the United States was founded on “Christian” ideals … you may automatically assume that they don't know what they are talking about.

The only area of what became the United States that was founded on “Christian” principles was the original Plymouth colony in Massachusetts, by the Puritans who were fleeing religious persecution in England … and of course, they promptly started inflicting their own warped sense of Christian values on the Native Americans and amongst themselves (Salem Witch Trials, anyone?).

This nation was NOT founded on the belief in one true God. When asked about this, Alexander Hamilton once responded that the United States was not in need of “foreign aid.” The majority of the founders, as was common during the "enlightenment" period of the mid to late 1700s, were "theists". They believed in a God but not in a specific religion as an expression of that belief. It is the main reason that they inserted that "freedom of religion" clause in the first amendment because they wanted no "established" religion as was the case with The Church of England.

One of the areas where the Evangelicals go off track is with this insistance of a "Judeo-Christian" foundation, posting of the Ten Commandments in public buildings, and prayer in school is that they don't understand the Amendment. You are free to practice (or not practice) any religion only because THE STATE in any form cannot force you to worship in any particular way.

The word God did not appear on US money until the Civil War, and did not appear in the Pledge of Allegiance until 1954, as a reaction to the McCarthy-driven anti-Communist hysteria. The word “God” isn’t mentioned in the Articles of Confederation. There are two brief mentions of God in the Declaration of Independence (“Laws of Nature, and Nature’s God” and “endowed by their Creator”), but the Declaration of Independence is not the document on which our nation is based. The Constitution, which was drafted 11 years later, holds that honor and there is not a single mention of God in the original document as adopted.

Furthermore, in the Treaty of Tripoli, ratified in 1797 in one of the Senate’s only unanimous votes, Article 11 famously states:


As the government of the United States of America is not in any sense founded on the Christian Religion, - as it has in itself no character of enmity against the laws, religion or tranquility of Musselmen, - and as the said States never have entered into any war or act of hostility against any Mehomitan nation, it is declared by the parties that no pretext arising from religious opinions shall ever produce an interruption of the harmony existing between the two countries.


In 1802, Thomas Jefferson wrote in a letter to the Danbury Baptist Association:


Believing with you that religion is a matter which lies solely between man & his god, that he owes account to none other for his faith or his worship, that the legitimate powers of government reach actions only, and not opinions, I contemplate with sovereign reverence that act of the whole American people which declared that their legislature should make no law respecting an establishment of religion, or prohibiting the free exercise thereof, thus building a wall of separation between church and state.


Note that Jefferson, along with Benjamin Franklin and Thomas Paine were not Christian. Although they believed in one Supreme Being, they rejected many elements of the Christian church. James Madison, primary author of the Constitution once wrote on Christianity:


What have been its fruits? More or less in all places, pride and indolence in the Clergy, ignorance and servility in the laity, in both, superstition, bigotry, and persecution.


All the founders, including the clerics among them, believed that true freedom of religion came from no official state sponsored religion.  By design, God, in whatever form, has no place in official government.  These twits in Congress who try to shove this "super religious, holier than thou" stuff down our throats are in direct violation of the intent of the founders of this nation who truly believed that everyone was totally free to form or not their idea and practice of religion. What they can not do is inflict upon or force their fellow citizens to share their idea and practice of same. 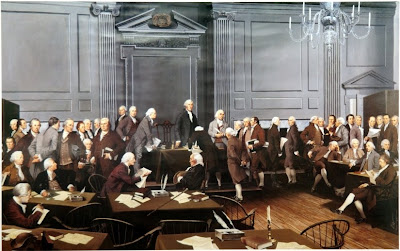 Signing of the Constitution
by
Louis S. Glanzman

This is an interactive portrait on the website linked. As you run your cursor over each of the signers, their names will appear as well as an historical write up of the events connected to the signing.
Posted by Durward Discussion at 6:34 PM

An excellent post as always, Jamie, full of some excellent historical facts that I'm hoping the people in Washington take the time to read. As a matter of fact, I think you should print this out and send it off to Congressman Forbes, or better yet find his email address and send it off that way.

Organized religion has probably caused more problems in this world than anything else I can think of and it has always driven me off the deep end when each side proclaims that God is with them. Excuse me? How can God be on both sides at the same time? If He was, there would be no war!

Thanks for stopping by. I was starting to think nobody loved me. :-)

Recent blog:=- September In The Rain

If I may use the vernacular...AMEN!