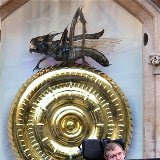 Today's Manic Monday word is Formula and I couldn't resist just publishing a link to this article that you may have seen about the formula for the grasshopper that eats time. Appropriately, Stephen Hawking, a man definitely aquainted with formulas about time, was on hand to unveil the grasshopper beginning to dine.

They call it the "Chronophage" (time-eater).
From the The Times on Line by Lucy Bannerman

On Friday night a monster began measuring the passage of time using new and decidedly sinister technology outside one of Britain’s most prestigious colleges.

Unlike conventional timepieces, the extraordinary “Chronophage”, due to be unveiled today by Stephen Hawking at Corpus Christi College, Cambridge, does not use hands or digital numerals to show the time.

Instead, it relies on a mechanical monster – part demonic grasshopper, part locust – that rocks back and forth along a golden disc, edged like a lizard’s spine. By a complex feat of engineering, its movement triggers blue flashing lights that dart across the clockface, letting students know if they are late for a lecture.

About two metres in diameter, the clock is made from discs of stainless steel and plated with 24-carat gold. With each slackening of the monster’s jaw, and release of its claws, another second is devoured. Each new hour is signalled by the rattle of a chain on an unseen coffin to remind passers-by of their mortality.

The £1 million invention is a tribute to John Harrison, the world’s greatest clockmaker, who solved the problem of longtitude in the 18th century.

The timepiece is completely accurate only every five minutes. The rest of the time, the pendulum pauses then corrects itself as if by magic. The blue lights play optical illusions on the eye, whirring around the disc one second, then appearing to freeze the next. The effect is hypnotic.

“Clocks are fixed, whereas we all know, time is fluid. It drags and it flies. Like Einstein said, an hour sitting next to a pretty girl can be like a minute, and a minute sitting on a hot stove can seem like an hour. I wanted this clock to reflect that, to play tricks with observers.” Dr Christopher de Hamel, Fellow Librarian at Corpus Christi, said: “I wanted it to be a monster, because time itself is a monster . . . It is horrendous, and horrible, and beautiful. It reminds me of the locusts from the Book of Revelations.
“It lashes its tongue, and flicks its eyes at you. It’s bonkers.”

Time is of the essence

Posted by Durward Discussion at 8:00 PM

Enjoyed this post. Mindst you, I had enough of science and time when they invented 'imaginary time' to prop up Big Bang.
I'd argue that our appreciation of time is the monster here. Life was so much gentler when a time period was a day. The world gets faster and madder the smaller the amounts of time we appreciate.
Not for nothing would I call a watch our jailer.

It's clever and mesmerizing. I like it because it isn't so much concerned with what time it actually is, but rather with the concept of time itself.

Hi Jamie. Hope you're having a most awesome week. Happy Manic Monday!!