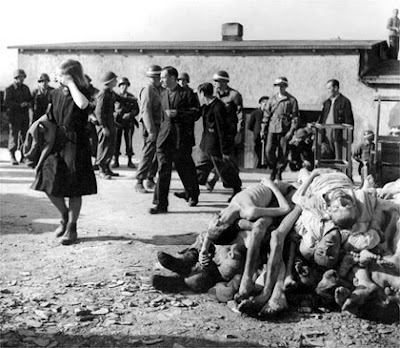 UPDATE ON MISSION
by Kathleen Cowley

Tristan Takos, the superb military liaison from Senator Kennedy's office called yesterday to let us know that they and Senator Kerry's office are drafting a joint letter to be sent to Secretary of Defense Robert Gates this Wednesday, May 13. She explained that they must follow protocol and contact him before approaching the President to request an Executive Order. Senators Kennedy and Kerry remain committed to gaining liberator status for the 94th Infantry as soon as possible with a goal of declaration by Memorial Day.

we hope the recognition of the 94th as a Liberating Unit will closely coincide with President Obama's upcoming visit to Buchenwald during the trip to France and Germany for the 65th anniversary of D-Day. It would be marvelously fitting for President Obama to honor the 94th Infantry Division as representative of all the liberators and the victims of the Holocaust prior to that trip. The fact that it is the 65th anniversary of D-Day points out just how crucial time is getting to be for the men of the 94th.

Our sincerest thanks to Senators Kennedy, Kerry, and your marvelous staffers for your dedication to the soldiers of the 94th Infantry Division and the untold victims of the Holocaust!
Posted by Durward Discussion at 7:10 AM

This is wonderful progress. Congratulations on all your hard work. I shall pray that everything falls in place for the 94th Infantry.

I hope this goes through as indicated and these individuals are honored for their contribution to the cause of peace. Thank you,Jamie, for all you do as well.

The wheels move so slowly in Washington but I sure hope they manage to avoid the bureaucratic muck and get this passed in time to honor the 94th Infantry at a most opportune time.

Thank you, Jamie, for all of your hard work and dedication to causes such as these.

This is going to happen. I'll hold off congratulating anyone until it does. But it must happen.

ok... I give up... what is the countdown clock to Towel Day? Please enlighten moi.

I hope this happens, Jamie!