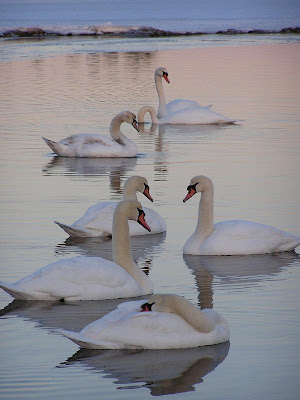 This Beautiful Card is Available from Bill Ewart

On the seventh day of Christmas, my true love gave to me:  Seven Swans A Swimming, And they can go on swimming, because I'm not cooking one even if they are supposed to be very tasty.

On the seventh day the lover sends seven swans. Swans have been associated with royalty and are often used on royal symbols.. Swans are also found in myths and folk tales dealing with love, so it seems are "true love" is getting even more romantic despite his fixation on avians.   At least he seems to be wealthy.
The Act of Swans, passed by Parliament in 1482, limited ownership of swans to landowners, provided they marked the swans to show ownership and kept them on their lands. If a swan went off the owner's land, the owner had a year and a day to find it and bring it back to his property. Under the act, all swans in open and common waters belong to the crown. While the 1981 Wildlife and Countryside Act protects all swans and makes it illegal to kill them, the Queen still technically owns all the swans in Great Britain, except for those in the Orkney Islands where the swans belong to the people. However, the Wildlife and Countryside Act applies in the Orkney Islands as well, which limits the rights of the people of the Orkney Islands to watching but not killing or eating their swans.
Until the nineteenth century, roast swan was on the menu for the king's Christmas dinners and other royal banquets. Since the nineteenth century, the turkey or goose has replaced the swan as the bird of choice for fall and winter holiday feasts.  With its close connection to royalty and royal holiday feasting, the choice of seven swans as a gift for this high born lady from her lover is appropriate.

Since I've decided not to bump off the birds, one of them should be named Sylvester since this is his Saints' Day.  According to stories, he was a pretty generous fellow delighting in using his fortune to dispensing charity, good will and food to anyone passing through his city.  As pope he is said to have been responsible for baptising Constantine and bringing to an end the persecution of early Christians.  This then becomes a day to give to charity or assist the lost and lonely.
Posted by Durward Discussion at 3:00 AM