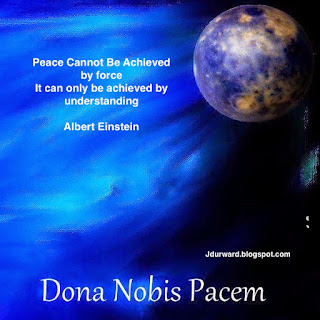 In 2006 Mimi Lennox, mistress of Bloggingham Castle started a little project.  For one day, bloggers who followed her would speak with one voice:  Dona Nobis Pacem.  They would post globes with that simple message.  What started as a hope nine years ago has now spread to more than 200 countries and it can take days to visit even a percentage of all the people seeking just one goal in our time:  GRANT US PEACE

Above is this year's globe and below just a couple of others I've done including a major favorite:  Bear 339 & The Bear A Tones who were created both for a song of peace and a hope for all the endangered animals on the planet. 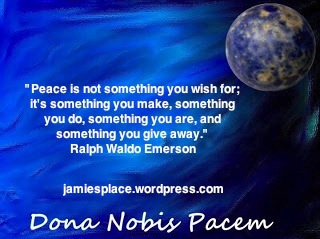 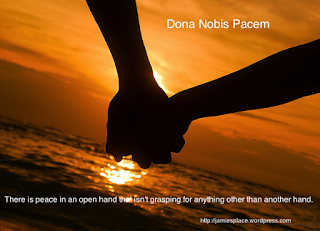 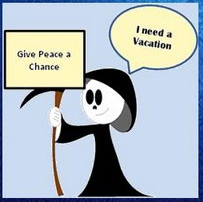 A fake fortune teller can be tolerated. But an authentic soothsayer should be shot on sight. Cassandra did not get half the kicking around she deserved .  Robert Heinlein

For those who don't know the story, Cassandra was a Trojan princess given the gift of prophecy by Apollo and then cursed by him with not being believed when she rejected his advances.  She was the one who said, "Beware of Greeks bearing gifts" as a warning not to take in the great horse left behind at the gates of Troy.

This story is the result of how she felt about people not listening:

Back to the way you think.  Most of the time you don't, which explains the mess we're in.  What mess?  This one, dummy.  Uh, no, the one that will be.  But really, it is now - to me.  About the mess we're in.  You know how you hate to make decisions that might hurt someone's feelings, and you hate to hurt pretty ladies most of all?  Right?  Of course I'm right.  I'm always right.  So being the dolt that you are, you get sucked into judging a beauty contest.  You've never judged a contest, you say.  You will - trust me.

Boy did you get rooked - will be rooked.  You took a bribe, ran off with the little roundheeled bitch, and now we have those hundred ships in the harbor.  No ships in the harbor?  Look later, they'll be there.  Just because the blind poet upped the number, doesn't mean the ones that are there aren't dangerous.  I shouldn't knock the author.  Not everyone could turn a cheating wife into an heroic epic.  It was a good book even with the exaggerations.  You've read it of course - no of course you haven't.  Note for shopping list:  Buy Ajax cleanser, packet of Trojans.  When am I?

So here we are in this clear and present danger (clear and present to me).  Why do you bother asking questions when you don't believe a word I say?  Go search some entrails!  Now there's depth for you.  When you're done, we can all make blood pies!  How in the hell did I get this job anyway?  I'll tell you how.  I made a mistake.  I repeated something I heard, only the person hadn't said it yet.  Victimized by a fast thinking slow talker!  It's a wonder I don't give up talking altogether the way everyone used to sit around waiting for me to say something meaningful.  If I said, "Tell the piper to stuff a mute in it!"  Someone else would say, "I was just thinking the music was too loud."  Then everyone was on the bandwagon with, "She's done it again; she's done it again."  Like hell I had.  THE MUSIC WAS TOO LOUD!  Of such things are reputations made.


Not that I wasn't talented you understand, but I pretty much stuck to the common place - she's jealous, he's angry, he's vindictive etc.  so my prediction rate was unusually high.  Nothing you couldn't get from a good course in body language (has that been invented yet?) - no, well someone will get around to it.  Don't fold your arms that way.  I have all the rejection I can handle right now.

Back to the subject.  I had this talent before that buttinsky masquerading as a god got into the act.  I mean I was giving feminine intuition a good name.  There was always the problem of seeing something first and then waiting for the dum dums to catch up.  Now that can really put a dent in an oracle's good humor.  But, it wasn't anything I couldn't handle what with all the glory when they found out I had been right all along.  That's something else the reporter of these events will get wrong.  Didn't his editor ever tell him to check his facts?  I had the gift before that womanizing creep of an immortal stepped in with his indelicate proposition.  Just because I told him to take a hike - after all, he wasn't going to be a god long enough for me to worship him - he gets all ticked off.  Now I might as well talk to the walls!  What makes you think you're an improvement on a wall?

So, as I was saying.  I have this little mental quirk that everyone wants, but no one understands.  Note to myself:  Check and see if those guys at Duke have made any progress.  Here I am on my little extrasensory soapbox with no one paying any attention, waiting for my palace to go up in smoke.  What's that old joke?  If it weren't for the honor, I would rather walk!  That one hasn't been told yet?  If you haven't heard it, stick around a few thousand years.

By the way, would someone call the fire department?  Call:  Alexander Graham Bell, where are you when I need you?  Fire Department:  Read my lips, ef-eye-are-ee Department - people in red suits who put out fires.  You understand "fire"?  I'm glad to know we've invented that.  What fire?  The one we're having next month, dodo.  That's which one.  I wonder if there's time to fly to Paris instead of trying to talk to him.

Idiots!  I'm surrounded by idiots!  The arms shipment from the US will not (repeat WILL NOT) arrive in time.  And to think, I used to like horses.

--The End of Then and Beginning of Now--
Posted by Durward Discussion at 4:53 PM No comments: