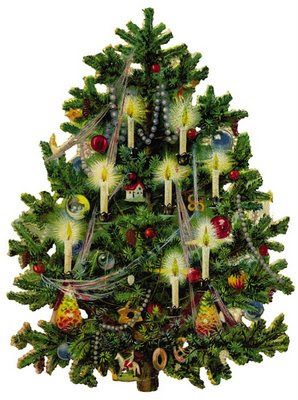 Several people have mentioned the banner I chose for the top of the blog this season. I wanted everyone to have a small taste of what was expected every Christmas when I was a small child. Here is a repeat from last year of "Aunt Ruth's Tree"

My aunt has been gone since 1966, but at this time of year ... there she is in memory scolding that I hardly do anything about Christmas. Her kind of Christmas started by finding the most beautiful tree ever (until the one for next year) was found, chopped down and carried with ceremony into the living room. Now this tree had it's own stand with a water supply that was covered by a HUGE, square, hinged plywood box that my uncle had made for her. The bottom branches were trimmed for wreath making, a sheet covered the box and over the sheet was spread cotton batting and a top layer of cotton with sparkles. This was just the beginning.

While my uncle was fighting with the Christmas lights (in an age when you couldn't tell which one was burned out without testing them all). She was in the kitchen whipping soap. Doesn't everyone whip soap? This was for the snow on the mantle tree made from manzanita branches with it's miniature ornaments next to a winter desert scene complete with snow, camels, wise men, shepherds, sheep, angels, and creche plus scattered teeny tiny wrapped packages as gifts for the infant. Underneath the mantle were the HUGE hand made stockings, quickly stuffed with all sorts of goodies. Then came the green garlands with red and green plaid bows for the three doorways leading out of the living room, the wreath to make for the front door, and fresh mistletoe for the entrance to the kitchen to make sure the cook got kissed.

Now the boxes appeared. From January 2 to the weekend before Thanksgiving, the boxes lived in stately repose on high shelves in the back of the garage. Every item inside was stored, padded and boxed to prevent movement or breakage just waiting to emerge for one more year of magic.

From the depths of the boxes came little mirrors to imitate lakes and little candles that looked like skaters on each of the mirrors. Then there was the town to erect: Houses, church, fire department, city hall, sleigh and horses and strolling carolers in victorian dress, all surrounded by the miniature train that circled the village. This tells you why I chose the banner at the top of this page. It is an echo of that long ago village.

Once the miniature people were in place, we could finally get around to the tree itself. Since the uncle had done his part of the spectacular by getting working lights on the tree, the gold and silver garlands were plucked from their hiding places to join the lights. From the dark recesses of the boxes came the most precious finishing touches: The Ornaments. She must have collected them for over thirty years. Oh there were a few normal glass balls of many colors, but then there were the brass angels blowing hallelujah on trumpets, Santa Claus with the reindeer and all his elves danced and flew across the branches, various creations from childish hands, animals of every possible kind, and glorious ones that would put Faberge's eggs to shame, all fighting for room on every branch.

Once all the lights and ornaments were in place, she would step back and inspect prior to the finishing touches of angel hair and tinsel. I still get nervous around boxes of tinsel. TINSEL IS NOT THROWN!!!!! It is hung one strand at a time until the tree glows with silver and light, waiting for the gifts to be stacked beneath and around (never too high to see the train and town). The very best present was always the one I got from St. Nick.

I only have one picture of one of her trees and unfortunately it is from 1947 in black and white and not on my computer, but to this day in her memory and my memories of those magnificent trees with all her ornaments, there is alway one package under my tree. I buy it and I wrap it, and put it under the tree but on the gift card just as it was every year of my childhood:

TO JANET FROM SANTA CLAUS

To see more trees, be sure to check out the Manic Monday Meme

What a wonderful tribute. Thank you for sharing your memories.

My grandma had the brass musicians and little mirrors as well. I actually forgot how much I loved them until I read your post. Now, my mission for next Christmas is to find some little mirrors like my grandma's.