The Lady With A Temper 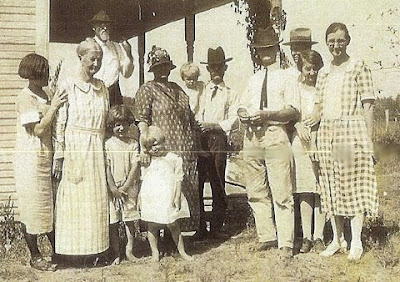 When I knew her she was in her 70s, rather sweetly mellow and teaching my cousin and myself how to hemstitch a pillow case.  She was an excellent seamstress and an expert in crochet, tatting, and lace making.  She made the best fried chicken, biscuits, and gravy I've ever tasted and she loved her visiting grandchildren whenever they dropped in.  Still the stories of her rages were legendary.  Her children relayed that her husband would literally flee the house rather than deal with her when she was on a tear.

In the picture above, she is the rather obese woman in the funny hat in about the center of the picture.  The two elderly people are her parents.  The man holding the baby is her husband.  All the other people are eight of her nine children.  She had lost one at three years of age, but managed to get all the rest to adulthood.  So for the most part, she was pregnant for 23 years.

Now Lydia was born in 1880.  Her once wealthy family had lost everything during the civil war and as a result moved from their lost properties in Tennessee to a rather dusty portion of Texas named Jacksboro and then moved on to the larger cities of Siloam Springs Arkansas with her parents and finally at 20 to Rowe, Oklahoma with her husband in 1901 where all of those children were born.  But she always retained an air of entitlement of courtesies and behavior.  When those were violated she would make her disapproval known in no uncertain terms.

They weren't wealthy even with the ever exploding brood but he was a hard worker with his own grocery store .  Of course when he entered her room in July of 1923 to congratulate her on the birth of their latest daughter, she did throw her shoes at him and informed him if he ever entered her room again, she would kill him.   That is about the time he took to humming and singing:  "Kicking My Old Dogs Around".

Just to make things interesting, a little dustbowl came along. 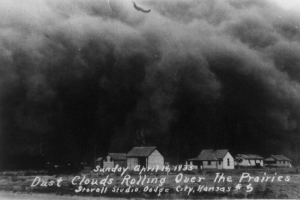 When you own a store and your clientele comes from the farming community, there is no way to stay in business.  Lydia, James, and their eight children moved to Fowler, California in 1930.  Again he was able to work, this time for a grocery chain until his death in 1936, leaving her with no insurance and three children still at home.  So she went to work as a maid.  Still the imperious lady announced to the local paper when a formal tea was served in honor of her last daughter's birthday complete with the guests and description of the service.   She would work until finally able to collect Social Security and live in a tiny apartment in Chowchilla and later Fresno near her daughters.  Before she passed away at the age of 89, she dealt with the deaths of four of her remaining eight children.  In 89 years of life she dealt with everything that came along, but there were definitely times when she made it clear that she deserved better.

It probably comes as no surprise that while working on some genealogy papers, I came across this hymn written out in her perfect, well instructed, ladylike, handwriting with a request that it be sung at her funeral.  From the words it is clear that she had finally arrived at an acceptance and wisdom about life that you take your joys where you find them and deal with the bad things as they happen without anticipation.  Still I think I would have loved to see her throwing those shoes.

I know not what awaits me,
God kindly veils my eyes,
And o'er each step of my onward way
He makes new scenes to rise;
And every joy He sends me comes
A sweet and glad surprise.

One step I see before me,
'Tis all I need to see,
The light of heaven more brightly shines
When earth's illusions flee;
And sweetly through the silence comes,
His loving, "Trust in Me!"

Oh, blissful lack of wisdom,
'Tis blessed not to know;
He holds me with His own right hand,
And will not let me go,
And lulls my troubled soul to rest
In Him who loves me so.

Posted by Durward Discussion at 10:54 AM

Email ThisBlogThis!Share to TwitterShare to FacebookShare to Pinterest
Durward Discussion,History,Politics I know Not What Awaits Me, Lydia McKeehan Pifer