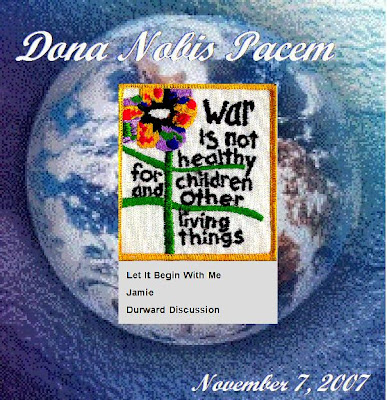 Visit Mimi, the Peace Globe queen, to get your own for November 7.

Over 40 years ago Lorriane Schneider (1925 - 1972), a woman and printmaker with lttle real artistic background created a poster because she feared her son might be drafted. To this day, this little drawing with its four branches to represent her four children and simple slogan is recognized as one of the icons of the Viet Nam peace movement. It is incorporated as part of my peace globe above.

It was not until TV producer Barbara Avedon gathered together 15 middle-class women on February 8, 1967 to discuss ways to protest the war did Schneider’s image find its true and enduring purpose. The women did not want to align themselves with the beards and sandals of youth nor did they want to be seen as wild-eyed radical route, yet they wanted to let the U.S. Congress know how enraged they were in the face of mounting body bags.

The group decided to send 1,000 “Mother’s Day cards” to Washington as letters of protest. The card said, "For my Mother’s Day gift this year I don’t want candy or flowers. I want an end to killing. We who have given life must be dedicated to preserving it. Please talk peace.” This act grew into the “Another Mother for Peace,” group which eventually became the vanguard of a surging protest movement.

Schneider was diagnosed with ovarian cancer and died in 1972 at the age of 47, but her anti-war poster and plea for social justice creation lives on. So I will now add my voice to all of the mothers and now grandmothers who have seen this image.

Peace to you my friend.

Great post, but it saddens me to know that today's populous is sorely lacking in social activism...Cheers Jamie!!

It's a lovely image - and an inspiring story (despite the sad bit at the end).

peace to you.
thanks for this story and this information.

Thanks Jamie I certainly remember that phrase and the drawing back in the day. The day isn't so different now...protesting this terrible war in Iraq!

Peace to you and everyone!:)

Ms. Schneider's peace message is as true today as it was in the 60's and early 70's. But, the difference between the two times is that there was a draft then bringing hundreds of thousands of families closer to the reality of losing a loved one in war. Today, we don't have a draft so very few mothers and others get upset about the ravages of the wars BushCo has going now with Iran on the horizon. We go shopping!

Laura Bush would have a peace message implanted over the President's bed if their daughters were faced with the draft or had already been drafted -- unless, of course, they were to join the Texas Air National Guard! Still, I support the sentiment of peace in our time as a war protester AND as a father of a career Army daughter, who has served in Iraq for one year thus far.

Patriotism and peace are not incompatible. The fact that this war was unnecessary doesn't take away from the committment and heroism of the soldiers serving there.

I love your globe. May you have a day filled with peace. :)

Lovely Peace Globe and a great post. Peace to you and yours. xx

Beautifully done! I was not aware of the history behind this drawing!
Thank you!

Absolutely true: Patriotism and peace are not incompatible. In fact, being for peace, which seems so difficult to achieve when you consider the number of wars the US is and has been involved with in the past 100 years, is most patriotic. The daughter has 18+ years in now and only months to go.

Renee, it's true, I'm still around mostly lurking these days but contribute some to my friends, DaDa, Jamie, and Engima. CL lost some of its charm and luster months ago for me. I was happy for your Red Sox, including their 13 run win during the post-season.

Beautifully done, Jamie. This is a post well worth the read. Moving. I am so glad you shared this with us. I did not know the full history of any of this.

Your beautiful globe is now in the official gallery.

Peace to you and yours,
Mimi