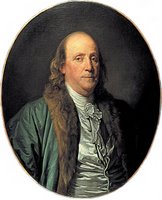 Following 9/11 Lucianne Goldberg (hardly a left wing operative) wrote a wonderful column with a concluding line: "Don't Trouble Trouble Until Trouble Troubles You". The thesis was that there are hazards just by virtue of being alive. You cannot spend your life in fear of what might happen outside of taking reasonable precautions for your own safety.

There will always be evil people in the world. Should the athletes at Munich not have participated just because Palestinians hated their country? Maybe I should stop shopping because gunmen regularly mow down people at the mall. Let's take the kids out of school. They don't need an education if it means another Columbine.

Those people on those planes and in the Towers did not go looking for trouble, but it came to them. A few thousand people died. Thousands more have died in Iraq. Within very recent memory, Mother Nature has polished off several hundred thousand people. Do you think we could get her to give up tsunamis and earthquakes ... Everybody move out of Los Angeles, she tends to be stubborn.

It is right for the government to take action to protect its citizens and curb the actions of those who wish us ill. It is not right for them to do it in such a manner as to threaten the rights of all. A secret, uncontrolled government is much more of a threat to the citizens of the nation in the long run.

We have a President who operates in secret without the consent of Congress or the knowledge of his fellow Americans in order to trace the money transfers of an enemy who has known for more than three years that he is tracing money transfers. This is more of a danger to the Republic than anything Al Qaeda could do. They are just an enemy and a threat to our safety. He is a threat to our Freedom.

Benjamin Franklin Wikipedia is credited with the following, "Those who would give up Essential Liberty to purchase a little Temporary Safety, deserve neither Liberty nor Safety. "

Live dangerously. Drive on the freeway.
Posted by Durward Discussion at 3:50 PM

And, in the meanwhile, the Voting Rights Act sits with an increasingly good chance of expiring because it "insults" a few states.

I can think of a few more who merit the insult.

And what does this banking scrutiny do to address the threats presented beyond the posturing by both Iran and North Korea?

There is a not so well executed spot (stupid casting) in a great campaign against Big Tobacco: in it the badly cast moron asks a bedding salesmen if mattresses should be outlawed. Why? Internal documents show that tobacco execs explored campaigning (snark, snark) to make sleep illegal... as more people die in their sleep than from smoking cigarettes.

To do everything, legal or not, in every direction to defend against terrorism offers up the same lack of credibility as blackballing that mass murderer sleep.

Particularly given our actions at Tora Bora and the large Al Qaeda petri dish we've grown all by ourselves in Iraq.

Terrorism is a legitimate and major national and international concern that needs to be faced bravely -- and honestly.

What was done with bank privacy may be legal or illegal. (However, it's kind of funny that an administration which has done its absolute worst to break the GAO is so damn keen on having every bit of financial data audited -- except, of course, its own in civilian and military agencies.)

And what happens when you criticize them? You get this endless and reflexive declaration of treason by a bunch of people who actually commit it on a daily basis yet use terrorism to excuse themselves (with pardons on the way) invites those inclined in this country and the world to make as tight a ring around their rosie as we can manage, night and day.

You can fear terrorism all you want and it won't ever make for an iota of patriotic virtue.

Patriotism is never truly about your enemies -- except in the mouths of tyrants and demagogues. Patriotism is about truly understanding and caring about your country in both thoughtful and sanguine ways.

Does anyone remember the first standard reason given by Bush for the 9/11 attacks? "They hate our freedoms."

So let's destroy those to protect ourselves.

We have not been asked to pay more taxes.

We have not been asked to conserve our resources.

For the first time all we have been asked to give up during wartime is our freedom.

To me, to give up any of what generation after generation of Americans have fought for -- and which many died for -- both in and out of wartime -- is the genuine treason.

When you give up... you surrender.

Ben Franklin was my favorite Founding Father. I've studied him on my own and did reports about him.

Rob, He's always been mine as well simply because he was such a scoundrel in addition to being a brilliant patriot. Check out the Wikipedia quotes page. It gives you the background on this quote which is quite different than the legend.

It's too easy for pols to invoke fear as opposed to principles, goals, and grace, unfortunately. Nice post, Jamie.

"Live dangerously, drive on the FREEWAY!.I like this ending of a well written essay. Thanks for putting the effort into this.

As for "9/11 survivor (sort of)" - I might have to steal your train of thought and paste it on my own blog ... with your permission of course.

Thank you and welcome. Drop in anytime.

"God grants liberty only to those who love it, and are always ready to guard and defend it." ..Daniel Webster said this and George Bush is doing it!

Well, I may be am tooo oblivious to with my surroundings or is it because the issue is not properly addressed by the government. I definitely agree with Benjamin Franklin with the following, "Those who would give up Essential Liberty to purchase a little Temporary Safety, deserve neither Liberty nor Safety. "