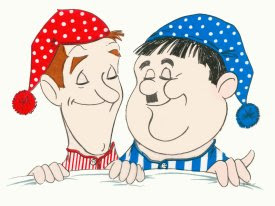 There are key phrases from motion pictures that most people will immediately associate with the film and often some personal association that has become attached to that line.

Fasten your seatbelts. It's going to be a bumpy night. - All About Eve

Of all the gin joints in all the world/The Usual Suspects. - Casablanca

I don't think we are in Kansas any more/You and your little dog too. - Wizard of Oz

When I worked at Verizon, there was a cartoon drawing of Laurel and Hardy. This cartoon made the rounds dependent upon whose actions had caused unnecessary additional work or created a crisis. The "Another Fine Mess" award had to be prominently displayed over ones desk until it could be passed along to another miscreant.

Do not be surprised if you see this cartoon waving from the flag pole over the White House for the next two years. The movies were humorous (see below). The state of the country is not.

Half of the duo (Hardy: The angry, arrogant, know it all) first signed a long-term contract with producer and director Hal Roach. Hardy began singing with a minstrel show as a boy. He later enrolled briefly in law school at the University of Georgia. Through Hal Roach, the rotund Oliver met skinny comedian Stan Laurel, a British-born actor who came to America in 1910. They didn't work as a team until director Leo McCarey paired them up for the short film Duck Soup, released in 1927.

Between 1926 and 1950, the pair appeared in more than 100 films, including 27 features, many of which Laurel helped direct. They won an Academy Award in 1933 for The Music Box, the story of two incompetent moving-company owners who are hired to move a piano up a towering flight of stairs. They stopped making movies in 1945, but got back together and made the flop film Utopia in 1950 and were planning another comeback attempt in 1954 when Hardy was debilitated by a stroke. He died three years later, and Laurel was inconsolable, vowing never to perform again. He died in 1965.
Posted by Durward Discussion at 7:24 PM

I enjoyed the Laurel and Hardy stuff. I wasn't aware of all of the history behind their lives...thank for sharing....

Hey Jamie did you see my 2000+ post?
Its very sad how laurel and hardy ended up!

Nice post and a couple of great comedians. I always enjoyed watching them.