How To Handle A Scandal 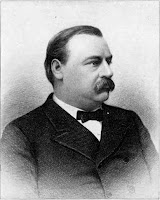 In this day and age of careful candidates, obfuscation, and twists and turns to mirror public opinion, there was one Presidential candidate who not only knew how to handle a scandal, but actually did the right thing when he didn't have to.

The Buffalo Evening Telegraph reported that Cleveland had fathered a child out of wedlock, that the child had gone to an orphanage, and that the mother had been driven to an asylum. Cleveland's campaign decided that candor was the best approach to this scandal: they admitted that Cleveland had formed an “illicit connection” with the mother and that a child had been born and given the Cleveland surname although several men could have been the father.

There was no proof that Cleveland was the father and the campaign claimed that, by assuming responsibility and finding a home for the child, he was merely doing his duty. Finally, they showed that the mother had not been forced into an asylum; her whereabouts were unknown. Blaine's supporters condemned Cleveland in the strongest of terms. However, the Cleveland campaign's approach worked well enough and the race remained close through Election Day. In fact, many Republican reformers, put off by Blaine's scandals, worked for the election of Cleveland.

When is modern day Washington going to learn that the fault is not in the sin but in the coverup? Of course where Shrub is concerned, the sin is being in the office at all.
Posted by Durward Discussion at 5:54 AM

What this really comes down to is that people were much more responsible in Cleveland's time as well as having a sense of decency that seems to be lacking in Washington these days.

We no longer elect our leaders based on their morales or their consciences or even their political prowess but by their name recognition or how many times they appear on Oprah or The View.

Great blog by the way, I came over via Claire's page and I will be back!

There is nothing else that I can add.

Thank you for stopping by. I'll look forward to your visits.

re Linda's post: actually, ppl do vote on the basis of assumed morals (witness "Christian" and evangelical support of Shrub; he would not have pulled out reelection without them as too many other voters had wised up by then). But agree: past time for decency to make a comeback. It's an underrated human quality.

Jamie: apropos of nothing: found a little tidbit re WHouse pastry chef's memoirs -- thought you might like it. My favorite: Prince Charles being served a teabag and hot water during a visit with Reagan. When asked why he wasn't drinking it -- he'd never seen a teabag before; didn't know what to do with it. I guess tea always appears freshly made and in nice china in his realm.

Maybe I'll post this on CList too; not sure it would interest anyone beyond you, me and Sheila...