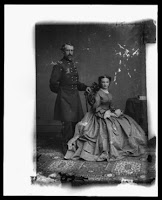 The Role of the Apologist In History:

Please Mr. Custer, I don't wanna go
Hey, Mr. Custer, please don't make me go
I had a dream last night about the comin' fight
Somebody yelled "attack!”
And there I stood with an arrow in my back.


When a leader makes a disastrous error, it is often in the best interests of those around them to cover up the facts. Too often ego is tied into action and rewards are obtained by association with the leader.

These days whether you are talking about casualties, equipment supplies, reasons for entry into the war, or attitudes of allies and enemies, the White House is in full defense mode. Even with the Libby trial, the reports from the battlefield, speeches in Congress, no one seems to have what it takes to tear the cover off the coverup. Even Congress, that ultimate organ of the people, cannot bring itself to talk honestly about the conditions in Iraq or impending actions in other parts of the Middle East. Slogans are tossed from right to left and back again, but no one will actually stand up and say "Since we have a President totally deaf to the wishes of the American public, we have to fix this mess as well as possible".

Admission of error is often the hardest thing that anyone can do, and for this President and his cronies, it seems to be impossible. That means that the people have to depend on their representatives who seem to be busily trying to be three places at once none of which are beneficial. Unfortunately, the damaged and dead cannot wait for history to catch up with the facts.

After her husband’s column was wiped out at the Battle of the Little Big Horn in June 1876, many in the press, Army, and government criticized Custer for blundering into a massacre. President Ulysses S. Grant publicly blamed Custer for the disaster. Fearing that her husband was to be made blamed by history, Libbie launched a one woman campaign to rehabilitate her husband's image. The image of a steely Custer leading his men against overwhelming odds only to be wiped out while defending their position to the last man became as much a part of American lore as the Alamo.

It would not be until the late 20th century, more than a half century after her death, that many historians began to take a second look at Custer’s actions leading up to the battle and found much to criticize.
Posted by Durward Discussion at 5:42 AM

Hey sorry to go off topic!
Colorado Bob sent me this site to use for links and for turning pictures into links, i use it all the time now!
click here

Don't be sorry. I really needed it.

It's no big, America was just an experiment and they blew it.

Just dig out another box of candy and enjoy the day. You're not here for that much longer anyway. :-)

Unless you are omnipresent, otherwise you don't have to worry about it much.