On The Third Day of Christmas 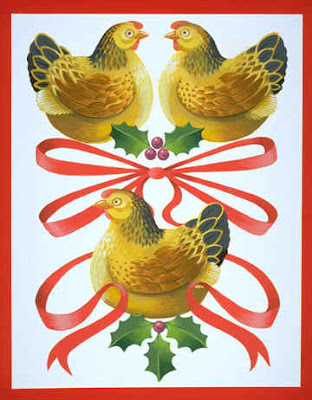 (Faith, hope, and charity, or the three gifts of the Wise Men: Gold, Frankincense, and Myrrh)

Gold stood for kingship, and purity and incorruptibility.

Frankincense was the foundation of holy incense, the medium through which prayer traveled.

And A Partridge In A Pear Tree

Almost everyone is familiar with the song without being aware of the symbolism and legends associated with each of the days.The 12 Days of Christmas actually begin at sundown on Christmas day (December 25) and proceed evening/day until the morning of January 6 or Epiphany which marks the celebration of the arrival of the Three Kings with their gifts for the Christ Child in the Church Calendar. This is the official period of Christmastide.

By legend each of the 12 days has a liturgical meaning used to teach children, the illiterate, and those not allowed to practice their faith openly due to religious persecution. Thus the "first day" is Jesus because the partridge will lay down its life to save its young. Day 2 is the Old and New Testament.

Any Excuse for Hugh Jackman

Posted by Durward Discussion at 7:24 AM

I did not know this. Thank you for the lesson once again! Are you by chance going to tell us what each of the days stands for as you have now piqued my curiosity!

All 12 Days plus a stop over in Shakespeare land for 12Th Night. A great punch from Martha Washington and wishing the Jeffersons and Washingtons Happy Anniversary. Which means I'll have to do two posts on Monday as I don't think there are any keys in the song.

Now that is a great rendition of "We Three Kings", which is one of my favorite songs of the holiday! Thanks for the gift, love it!