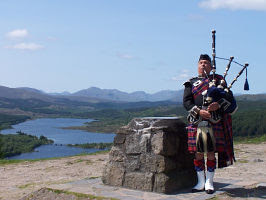 For as long as but a hundred of us remain alive, never will we on any conditions be brought under English rule. It is not for glory, nor riches, nor honours that we are fighting, but for freedom — for that alone, which no honest man gives up but with life itself.

The Declaration of Arbroath
6 April 1320.

The Declaration of Arbroath is considered a source document, and many of the ideas relating to the unalienable right to freedom in this declaration eventually found their way into the American Declaration of Independence more than 400 years later.


The manifesto affirmed the nation of Scotland's independence in a way no battle could, and justified it with a truth that is beyond nation and race. Man has a right to freedom and a duty to defend it with his life. The natural qualifications put upon this by a medieval baron are irrelevant, as are the reservations which slave-owning Americans placed upon their declaration of independence. The truth once spoken cannot be checked, the seed once planted controls its own growth, and the liberty which men secure for themselves must be given by them to others, or it will be taken as they took it. Freedom is a hardy plant and must flower in equality and brotherhood.

From The Lion in the North: One Thousand Years of Scotland's History
Penguin Books.

So whether your heritage is Scottish or not, Tartan Week in celebration of the Declaration of Arbroath is for you, as is Bob Burn's song celebrating the rights and freedoms of the individual.

Ye see yon birkie ca'd a lord
Wha struts an' stares an' a' that
Tho' hundreds worship at his word
He's but a coof for a' that
For a' that, an' a' that
His ribband, star and a' that
The man o' independent mind
He looks an' laughs at a' that

A prince can mak' a belted knight
A marquise, duke, an' a' that
But an honest man's aboon his might
Gude faith, he maunna fa' that
For a' that an' a' that
Their dignities an' a' that
The pith o' sense an' pride o' worth
Are higher rank that a' that

Then let us pray that come it may
(as come it will for a' that)
That Sense and Worth, o'er a' the earth
Shall bear the gree an' a' that
For a' that an' a' that
It's coming yet for a' that
That man to man, the world o'er
Shall brithers be for a' that
Posted by Durward Discussion at 6:15 AM

Thank you for this wonderful history lesson.

"but for freedom — for that alone, which no honest man gives up but with life itself."