5 On Friday - Oh What A Beautiful Musical

1. Grab the banner, make your post title Five on Friday, and be sure to link back here.
2. Go to Playlist.com to make your Set of five songs. You may choose a particular theme to share with us, or post random tunes if that's your vibe for the day. You can simply post the Set, or you can add a little summary about what you are sharing.
2a. Don't feel restricted by the tracks listed on Playlist.com. And don't be discouraged if the Embed code won't work. You're welcome to use any type of media to share your Sets.
3. Be sure to sign Mr Linky so everyone can visit your Set.
4. No tags, but feel free to invite your friends to play along if they need a post topic on a Friday.

There was something musical happening on April 1 but it was the sad death of Marvin Gaye and since something absolutely remarkable that changed musical theater forever happened on March 31, I'm cheating a bit.

Based on the play Green Grow the Lilacs, the first title given to the work was Away We Go! which opened for out-of-town-tryouts in Connecticut on March 11, 1943. Expectations for the show were very low, the composer had just broken up with his alcoholic if brilliant lyricist and the new writer and lyricist had had six flops in a row. The producer, Mike Todd is supposed to have walked out after the first act during the tryout and wisecracked “No legs, no jokes, no chance", which was quoted by Walter Winchell in his New York column. The cast was so depressed that there is an apocryphal story that Celeste Holm was supposed to have asked, "Who do you have to lay (euphemism) to get out of this thing?"

And then the curtain went up March 31, 1943 on Rodgers and Hammerstein's "Oklahoma!", and musical theater has never been the same since. It ran for an unprecedented 2,212 performances. For more than 65 years now it has been in almost constant award-winning revivals, national tours, foreign productions and an Academy Award winning 1955 film as well as a popular choice for school and community productions.

The selections below are all from the wonderful 1998 London revival. The international cast included Hugh Jackman as Curly, Maureen Lipman as Aunt Eller, Josefina Gabrielle as Laurey, and Shuler Hensley as Jud Fry. This production was filmed and issued on DVD, as well as being broadcast on U.S. Public in November 2003. 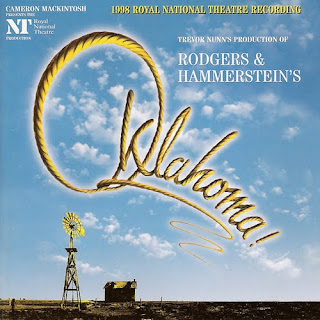 Surrey With The Fringe On Top

People Will Say We're In Love

I Can't Say No (Vicki Simon as Ado Annie)

Oklahoma
Posted by Durward Discussion at 12:01 AM

I am a HUGE fan of Hugh Jackman, and when I first found out that he had been in a stage production of 'Oklahoma!' I was SO sad that it was all over and done with, and I would never get to see him as Curly.

And then it came out on DVD. One of my many dream-come-true moments!

I watched every second of your selections today, Jamie (I have the day off of work.) He is just so phenomenal. He delivers song lyrics like dialogue. He's awesome.

Two of my favorite Hugh Jackman/Curly moments: the dream ballet sequence (dreamy indeed!) and 'Oh What a Beautiful Morning' (his delivery at the end - words cannot express its perfection.)

I had the pleasure of seeing "Oklahoma!" on Broadway probably close to ten years ago at this point and loved it but unfortunately it didn't have Hugh Jackman! That would have made it even more memorable!

Of course, come to think of it that's back when I could still afford to go to a Broadway show and didn't need to sell a teenager to do so!

Great choices for this week and definitely inspiring enough for me to try to find that DVD!

A great set.I loved the original move when it was played on TV in my youth.

I was actually in "Oklahoma" in Middle School. It was a district production, so definitely more local, but so much fun!! Those songs are some that you don't really ever forget.

I love the music from this show and I'm pleased to report that we get to see it at The 5th Avenue theatre in Seattle for the 2011-12 season.

I wanted to play Ado Annie but my best friend got that part. High school.
Oh, you never ever forget those songs!!!