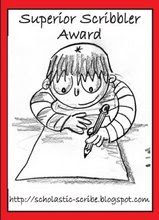 Linda of Are We There Yet? presented me with the cute little fellow on the left. She received hers from Ralph of Airhead 55 who received it from Leora of Here in HP who got it from Robin of Around the Island. All of which adds new meaning to "Six Degrees of Separation".

There are a few duties before you can claim your "Scribbler":

Link to your tagger and list these rules on your blog:

2. Tag 7 people (if possible) at the end of your post by leaving their names as well as links to their blogs.

3. Let them know they have been tagged by leaving a comment on their blogs.

Strangely enough I was considering doing a version of the 100 things meme but making it some of the truly weird things I had done or had happen to me. I may do that later, but for now seven seems to be a reasonable number.

1. Just the other day I told someone that I once chased a cow out of the alfalfa by smacking its rear end with a machete while dressed only in boots and my birthday suit - now you all know that I have run nude through the shrubbery.

2. About this time of year one of my favorite things to do is a "Rockefeller Double Feature" - Go to a multiplex and buy tickets for two Golden Globe or Oscar nominated movies timing it for a break between the two movies.

3, In 14 years of education, I attended 23 schools. Lucky for me, most teachers are so busy that they are glad to have a student they don't have to teach, so most of my education consisted of books and an unsaid message from the adults (call me if you need me).

4. I finally gave up smoking, but I still bite my nails.

5. I married the same man twice. Warning sign: The second time around a major snafu had us sleeping in the front seat of a car while the best man and matron of honor slept in the back seat in the middle of the Nevada desert during a snow storm.

6. Even though I have now been in Washington for several years, I still really really miss California.

7. My favorite flowers are yellow jonquils because in high school I played Amanda in Tennessee Williams' Glass Menagerie: "That was the spring I had the craze for jonquils. Whenever, wherever I saw them, I would say, "Stop! Stop! I see jonquils!" 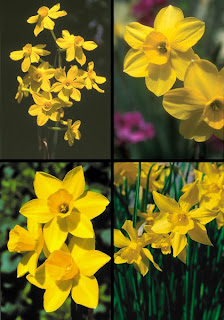 I don't do tagging, but feel free to steal and let me know if you do and I will tell others to visit you.

Linda did tag my buddy Carol over at A Letter to Me. Since I did seduce her to the dark side by insisting that she start blogging, do go visit and say hello.

Posted by Durward Discussion at 3:16 PM

ummmmmmm... #1? too much information. bwahahahahaahhahaahaha!

not everyone can say they've done that!
>wink<

A machete and a pair of boots? And that's it? Okay, what I want to know is why did you have a machete to begin with?!?

Congrats on giving up smoking, I hear it's one of the hardest things to do out there. Luckily I never started but there's a story there I might just have to tell one of these days!

HUllO AGEN! WOW! I waz just goin bak over sum old posts a I fownd a link to yu so I thort I'd pop in an see if yu remember me. Wa-hey!

You really CAN say... been there, done that can't you?

P.S. Thanks for the plug... I have something special planned, hope it works...

Okay, I get the machete now but nekkid? Is that because Mexico is so hot? Or were you trying to get an all-over tan?!?