Have I Got News For You 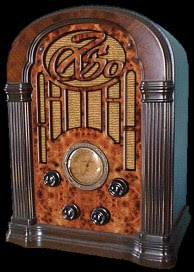 We have just been through the "news" at its worst with the coverage of Britney and Anna. Now we are getting the "news" at its best with the exploding scandal involving the Veteran's Administration. For more than 75 years people have been "staying tuned" to find out what is going on.

The first radio newsreel, The March of Time, debuted on March 6 in 1931. The show, associated with Time magazine, featured dramatizations of news events, complete with music, sound effects, and a stable of actors to impersonate real news figures. There are times when you would swear they are still imporsonating the news itself.

The whole idea of "news" is that someone who was there is telling you what happened. It doesn't matter if it is Homer reporting on the Trojan War, the jester going from court to court to relay the goings on elsewhere, or the broadsheet posted on a printers shop window for someone literate to read to the crowd.

Now the MSM is becoming more than radio, TV, and Newspapers. Learning to sift your way around the internet can be a full time job as to whom to believe and when. Modern news is starting to come to terms with millions of "on the street reporters" all with access to a keyboard.

And while I am at it, though it is a bit off topic, for all those who love "I Was There" reporting, the trailer for my all time favorite movie that you absolutely MUST rent or buy: 84 Charing Cross Road.

Posted by Durward Discussion at 11:26 AM

I've seen both the movie and a play.

Excellent post on the power of the news media.
84 Charing Cross Road & One Hundred Years of Solitude: must add to my B&N wish list! Thanks!
cheers,
mo