Some More Ways To Go Green 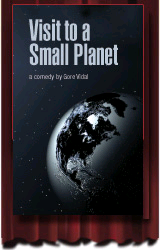 Back in the Fifties there was a comedy called Visit To A Small Planet by Gore Vidal filled with the ascerbic wit only Gore Vidal could provide. It then lost it's satirical effect in a Jerry Lewis movie. Back then the foibles of the human race were the Cold War, Communism, nuclear weapons, and the rise of the importance of television in family life. Looking back after a half century it is well worth the effort to read.

In the meantime while waiting for Amazon to deliver your copy, here are some ways to hang on to a planet so that Kreton might have some where worth living to visit in the future.

Ten Ways To Save The Earth

For a longer look at going green, the Sundance Channel has done a wonderful series called Big Ideas For A Small Planet
Posted by Durward Discussion at 7:42 AM