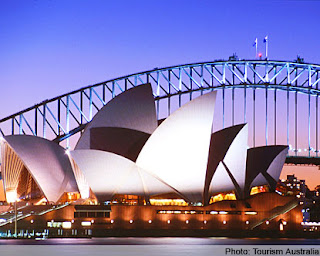 It was a simple beginning. I went to a movie On The Beach. It was a very good movie with a great cast and was based on a book that I had read by Nevil Shute. Then he kept writing. Damn the man, but he was a good author. I managed to ignore him until PBS did a production of another book: A Town Like Alice.

Now I'm starting to think in terms of Australia stories, movies, people. .... don't you hate it when the world opens up and says, "Come On In".

Damn it they have a whole industry down there for the past thirty years where I wasn't looking and they have shipped their stars north. Now this is fair warning. Buy Peter Allen albums. Go to see Hugh Jackman in the theater. Forgive Mel Gibson and see his movies. Watch Australian mini series on WE or PBS. Pay attention to Nicole Kidman in all her roles, but never never accept an invitation to party with a bunch of Aussies.

I did once. It was about 1983 in the Santa Monica canyons ... they took prisoners on a Friday morning and finally released the hostages late on Sunday. Somewhere in the middle of Saturday night, I crawled off to a corner for a few minutes. You have never been awakened until you open your eyes to a bunch of bouncing bodies singing, "Go Aussies Go". Then there was the politician or why I love Australian women. There I was in a deep conversation of world wide import with a man who actually turned out to be a member of the Australian parliament when he wasn't being an actor/singer filming Pirates of Penzance. Some female trying to start trouble asked his wife if she minded. Confident reply: "I'm just glad someone else wants to listen to him!!!"

Everytime I see a travelogue, view the images of the Sydney Opera House in full sail, contact some distant relatives who migrated to the island continent, or look at the itinerary for a cunard liner just waiting to head for that harbor, the longing to go becomes almost overwhelming. Don't bother telling me they have a snake that can drop you in your tracks not to mention several species of poisonous arachnids and insects and the spur on a platypus. So what if those cute, cuddly Koalas are not quite as cuddly as they appear. All it takes is one Qantas commercial and I want to go. For the two minutes it takes to play one song, I'm dewy eyed and homesick. So even though I've never been: I Still Call Australia Home.

Posted by Durward Discussion at 4:25 PM

You had me...until you mentioned arachnids. They don't even have to be the poisonous ones to give me the heebies.

I do think Australia is a cool place though...just don't make me go in the bush.

I sent you an email re: Peace Blog.

hey.... if you love Australia so much..... I hope you own and have read a book by Bill Bryson entitled "In a Sunburned Country"....

It's all about his trip to Australia..... with lots of history and humor sprinkled throughout.....

I highly recommend it!

Jamie, I've been "down under." In Sydney and up on the Great Barrier Reef. And I remember saying at the time: It may be the only other country I could live in. You say: "Forgive Mel Gibson and see his movies." How did you know ? I do have to forgive him - and I'm trying. Did you ever see him (very, very young) in "Tim" a film based on Colleen McCullough's novel of the same name? See it, see it! Nevil Shute - A Town Like Alice - incredible book. Book better than the movie but the movie doesn't suck. :)

I think Australia is a great place too - was there 10 years ago, both in Perth and Sidney.

Nice! I really enjoyed reading your post. Thanks for sharing and keep up the good work.