A Pocketful of History 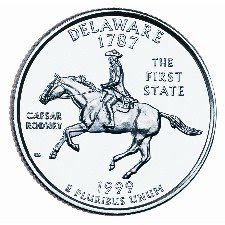 The initial 50 State quarter program began with the first state in the union, Delaware issued in 1999, and comes to an end this year with the last state to be admitted to the union: Hawaii. It is interesting that this quarter will be issued shortly before the Presidential election when for the first time there will probably be a Hawaiian candidate on the ballot with Barack Obama.

Unlike most coinage, the quarters have actually earned money for the Treasury because so many people around the world have been collecting the whole set. It has been so successful that it will be extended with quarters for the District of Colubia and U.S. Territories over the next couple of years.

The following review is of a fascinating book that tells stories about how and why the various designs for each state were chosen by their respective states for submission to the treasury. Each one offers insight into the history, personalities and events important to the state.

A Pocketful of History
By Jim Noles

History, Sartre said, is what happens behind our backs (or something to that effect). It's also something that jangles in our pockets, if we carry or save or even spend quarters from the 50 State Quarters Program. We know this because Jim Noles has taken the time and expended great effort to write the winsome and valuable A Pocketful of History: Four Hundred Years of America—One State Quarter at a Time (Da Capo Press).

Following Canada's lead in the mid 1990s, the US government decided to issue, over a period of ten years, commemorative quarters representing some significant and representative event or symbol or enduring attribute of each of the fifty states, issued in the order in which all fifty states came into the union. There is more than one history at work here, that being a coin's depiction of a state's historical self-definition — but, in addition, much to our benefit, Noles has taken the time to tell us the stories behind the states' decisions and debates on which events or symbols to use, and how best to depict them.

Those descriptions in themselves prove to be a fascinating look at how politics and personalities shape what we see and how we see it — a history lesson in itself.

In scrupulous — but not overbearing — detail, Noles tells us about Delaware's Ceasar Rodney who, in 1776, suffering from a debilitating cancer, rode 80 miles in one day from his home state to Philadelphia just in time to cast his vote for independence; or Colorado's perhaps not unexpected depiction of the majestic Rockies as a symbol of the beauty and natural resources of the state; or North Dakota's display of bison and the stunning buttes and mountains that make up the 39th state's harshly beautiful Badlands.

The legislation to create the 50 State Quarters Program was signed into law in 1997 by President Bill Clinton, and the plan was to issue the quarters incrementally over a ten-year period. By the end of 2008, with the minting of Hawaii's quarter (Hawaiian monarch King Kamehameha I stretching his hand toward the eight major Hawaiian Islands), the Quarters program officially ended, and it has proven to be an enormous success — both financially for the government and aesthetically and historically for numismatists and otherwise interested parties everywhere.

Noles, thankfully, provides us a comprehensive look at the very distinct, yet commonly bound, 50 states that make up the U.S. He does so with enough erudition to make the book substantive while interjecting the perfect amount of lightheartedness and whimsy to make the book eminently readable.

District of Columbia and Territorial quarters will be minted in addition to the 50 quarters the last to be issued this year with Arizona, Alaska, and Hawaii. 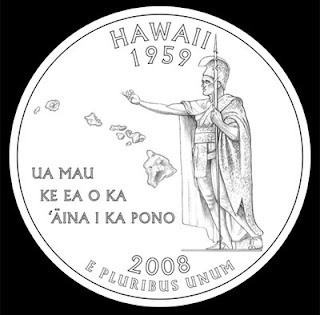 "The life of the land is perpetuated in righteousness"
Posted by Durward Discussion at 10:30 AM

I had started collecting these back when they first came out but due to a financial crisis of some sort of other, I actually had to use them instead.

Apparently coin collecting is never going to be my forte!

I'm back to say that I have given you an award and hope you like it! Stop on by and pick it up here!

I didn't know that DC and the territories will be issued quarters, too.
Interesting.

I still enjoy coming across these quarters. I never really collected them though.

I remember several times getting a handful of change, and all of the quarters would be state quarters. So I figured I'd always be able to find them if I ever wanted.