The Body In The Castle 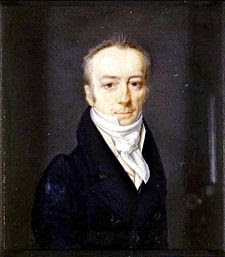 On this day in 1829 a man died in Genoa, Italy. He was very wealthy, but there was no hint of foul play as he had been ill for a long, long time. He had no family other than one nephew who inherited the huge fortune, but the will did have some strings attached. If the nephew died without children, all the lovely money went to a place that the deceased had never seen. Why he made that provision is still a mystery 179 years later.

The nephew did die without children and the money did go elsewhere as directed and as a result, you can visit both the man in his crypt in the entrance of a huge red castle, and see the result of his bequest. Plan several days for this visit as there are lots of buildings, many miles, a subway ride or two, and lots and lots of animals. You still won't see it all as the storage areas, workrooms, and research areas fill warehouses not open to the public.

The bequest of James Smithson to the United States of America is probably the greatest single gift from one man to a nation. In 1836 President Andrew Jackson sent diplomat Richard Rush to England to negotiate for transfer of the funds, and two years later Rush set sail for home with 11 boxes containing a total of 104,960 gold sovereigns, eight shillings, and seven pence, as well as Smithson's mineral collection, library, scientific notes, and personal effects. After the gold was melted down, it amounted to a fortune worth well over $500,000. After considering a series of recommendations, including the creation of a national university, a public library, or an astronomical observatory, Congress agreed that the bequest would support the creation of a museum, a library, and a program of research, publication, and collection in the sciences, arts, and history. On August 10, 1846, the act establishing the Smithsonian Institution was signed into law by President James K. Polk.

Today, the Smithsonian is composed of 19 museums, nine research centers throughout the United States and the world and the national zoo. Besides the original Smithsonian Institution Building, popularly known as the "Castle," visitors to Washington, D.C., tour the National Museum of Natural History, which houses the natural science collections, the National Zoological Park, and the National Portrait Gallery. The National Museum of American History houses the original Star-Spangled Banner and other artifacts of U.S. history. The National Air and Space Museum has the distinction of being the most visited museum in the world, exhibiting marvels of aviation and space history such as the Wright brothers' plane and Freedom 7, the space capsule that took the first American into space. John Smithson, the Smithsonian Institution's great benefactor, is interred in a tomb in the Smithsonian Building.

Enjoy the links as the zoo web cams and the on line exhibits are fascinating. Just remember to say thank you to the man who cared about knowledge so much that he made sure the United States would never be without it. Even though he never saw the country while living, his body rests in honor in the first building erected with his fortune. 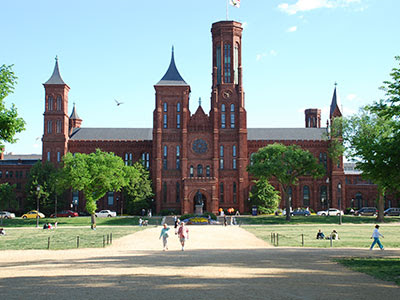 Posted by Durward Discussion at 6:34 AM

I'm embarrassed to admit that I didn't know the history of how the Smithsonian came to be. But it's certainly something I expect to tour at some point in the future.

Whenever I think about "the big disaster" - the comet, the earthquake, the tsunami, the volcano - I worry about places like the Smithsonian that house our national heritage and our knowledge.

What delightful info! I was in ignorance, as well, of the history of the Smithsonian. I've never gotten to tour it, and I rue that. Maybe one day soon...