Three On A Match 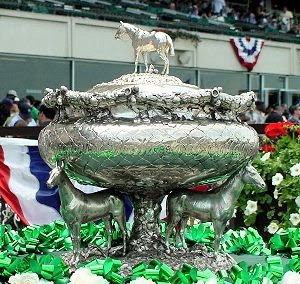 For another year we will go without a triple crown winner. Whether it was the heat, the hoof, or the lack of recent runs, Big Brown just didn't have his motor running yesterday. Let us hope it was nothing more serious than one of those reasons.

In the previous blog entry I described the Belmont Stakes Trophy with the figure of Fenian on the cover and the three foundation horses supporting the bowl. Several people wrote that they didn't realize that to be a thoroughbred, a horse is required to be descended from Eclipse, Herod or Matchem and inquiring about the history.

My thanks to History and Origin of the Thoroughbred Horse for the following information. If you love either history or horses, please take the time to read all of the wonderful material on this site and explore many of the links to additional information.

In the early 1700s three Arabian horses arrived in the British Isles. The first was "The Byerley Turk" who had been captured by Colonel Robert Byerley from a Turkish officer at the battle of Buda in 1688. The Turk became Colonel Byerley's war horse and after the Colonel's marriage came with him to Goldsborough Hall where it retired at stud and covered many mares. The Byerley Turk died in 1706 and is said to have been buried in the grounds beneath a tree. The matings of The Byerly Turk led to a horse named Herod who was foaled in 1858

The Darley Arabian was foaled in 1700 and was purchased by Thomas Darley while he was in Syria in 1704. He sent the horse to Yorkshire, England where he was bred to numerous mares. The most successful matings were with Betty Leeds. The Childers line and the Darley Arabian became the great-great-grandsire of Eclipse who in his racing career was described as "Eclipse first, the rest nowhere." The Darley Arabian is the most important of the three foundation stallions in terms on his influence of the Thoroughbred breed.

The last of the foundation stallions to come to England was the Goldophin Stallion who was foaled in Yemen. After being shipped to Syria and then to Tunis, he was given to the King of France as a gift. Edward Coke saw him and brought him to England. The second Earl of Godolphin acquired the horse and bred him to several distinguished mares. Mated to Roxana, he sired Lath, the greatest racehorse in England after Flying Childers: and another mating of these two produced Cade, the sire of the great Matchem who carried on the line of the Godolphin Arabian. In 1850 it was remarked that "the blood of the Godolphin Arabian is in every stable in England."

The following details are from the History site:

The offspring which fixed the influence of the Byerley Turk as a foundation sire was named Herod who was foaled in 1758. He was owned by the Duke of Cumberland, the third son of King George II, who was an important breeder of horses at Newmarket and in Hanover. Although Herod was not an outstanding racehorse, he did prove to be a superlative sire. His descendants were extremely important in the development of the Thoroughbred throughout Europe and America. Among the most notable descendants of Herod were Diomed (winner of the first Epsom Derby in 1780), Sir Archie, the Flying Dutchman, and Epinard.

1764 was the year of a great eclipse and this astronomical event became the name of the horse that was a star in the history of the Thoroughbred. Eclipse, as we know him, was by Marske, out of Spiletta and was bred for the Duke of Cumberland. He began racing in 1769 at age five, when he ran away from his competition in his first race at Epsom. It was at this race that the famous Denis O'Kelly remarked, "Eclipse first, the rest nowhere." Eclipse won 18 races in his career and he was never whipped or spurred. He went on to a distinguished career at stud, siring Pot-8-O's who passed on his influence to such descendants as American Eclipse, Hyperion, Kelso, and Sea Bird. The list of Eclipse's distinguished descendants is virtually endless, and he is the reason for the predominance of the Darley Arabian line over the lines of the other two foundation stallions.

Most racehorses are noted for their speed, but the speed often comes at the price of an excitable temperament, and even viciousness. The horse Matchem foaled in 1748 was the grandson of the Godolphin Arabian. Besides speed, he supplied an excellent disposition to his descendants. The horse Snap was compared to the gentle Matchem: "Snap for speed and Matchem for truth and daylight." (Snap was a grandson of the Darley Arabian.) When we consider Matchem's blood heirs, we find many even-tempered yet fast horses. Matchem's influence was not as widespread as his famous peers, but his offspring had a particular influence on American horses. The owner's son, Edward Fenwick, who immigrated to South Carolina in 1755, brought ten of Matchem's descendants to America. Brutus, one of Matchem's sons, dominated racing in South Carolina for some time. 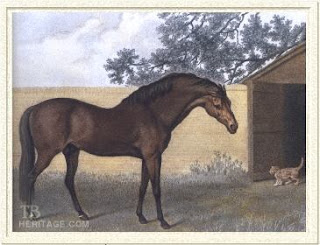 Posted by Durward Discussion at 6:00 PM

Thank you, Jamie, for the additional information. I would think that it would be quite the task to trace back a horse's bloodline to one of these three amazing horses but I'm sure it's well worth it.