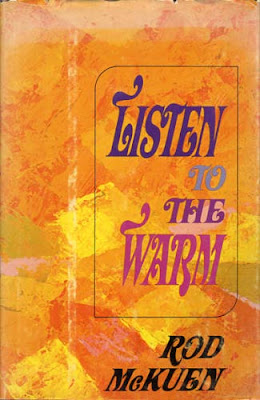 The instant I saw this week's word, my brain took a time travel trip and said, "Listen To The Warm" by Rod McKuen

"It doesn't matter who you love, or how you love, but that you love"
--Rod McKuen

Suddenly there I was in Northern California with a hippie brother in law and his friends camping out on the floors of our terribly middle class tract home and cooking their macrobiotic recipes in our kitchen while strange smells wafted from the smoke drifting in from the patio. They eventually finished hitch hiking their way to San Francisco where there just happens to be a street by the name of Stanyan.

Over the next few years, you couldn't go anywhere without seeing Rod McKuen's name on a book, on a record, being interviewed on TV, translating the work of Jaques Brell and having his songs sung by everyone from Glenn Yarborough to Frank Sinatra. I loved the poetry and the music and that mellow voice describing all sorts of intimacies among the shadows of blowing draperies across tumbled sheets of a well used bed. Romantics all over the world became more than a little overheated to the sound and words of Rod McKuen.

Imagine my surprise more than four decades later to find that Mr. McKuen is still writing, still performing, still traveling, and still rattling more than a few cages. What's more he has web pages and a bibliography which you can access through the link on his name above. As an alternative, you can just sit back and listen to the warm with a story about "A Cat Named Sloopy".

And last, the McKuen English lyrics to a beautiful Jaques Brel song
sung by Julio Iglesias - if you go away - ne me quitte pas


Posted by Durward Discussion at 10:00 AM

Note: McKuen dot com was up yesterday, but doesn't seem to be working today. Will check later to see if it is working later. In the meantime try Wikipedia's article on Rod McKuen

OMG! OMG! I was in love with Rod McKuen when I was in high school, Jamie!!! I think we are sisters, separated at birth or something! What a trip down memory lane ... THANK YOU!

I don't recall much of him over here in the UK, but you evoked many memories of my youth here.

I have to google him...LOL But I love that line!!!

Happy Monday to you...

Love this Manic Monday...excellent..Happy Monday to you :)

My mom was a huge fan of Mr McKuen. I remember a lot of his stuff.

Happy WW! I need to get back with y'all on Manic Monday...

I invite your blog readers to get loose for the Kentucky Derby...