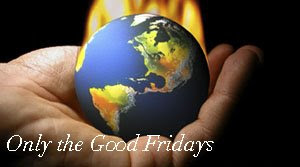 As many of you know, my son Chris works on base at Fort Lewis in Washington. As a result his son is delivered to their after school rec center each weekday. This week Chris was locked in for long hours for all sorts of "secure" things that he doesn't talk about and I don't ask. As a result, I had pick up duty for David all this week.

In order to fill the time until the bus arrives, I usually sit in the waiting area and read the Northwest Guardian until he arrives. It is a small weekly paper issued every Friday that is totally devoted to Fort Lewis, the families that live there and the men and women who serve there and all around the world. I'm used to reading about everything from heroic battle action to athletic competion to the latest family picnics or outings.

Yesterday's reading was a little bit different: On March 17, Pfc. Seth Manderscheid went home and explained to his wife Whitney why he was late and then thought nothing more about the events of an otherwise normal day. All he had done was what he had been trained to do and did it when necessary. At least he thought nothing more about it until he was notified that others had taken notice of his actions and that General Casey would be speaking to him. You can read the whole story on the link above, but because of this rather quiet and modest young man, a child is still alive and that is about as good as it gets. 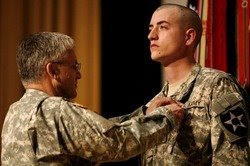 Email ThisBlogThis!Share to TwitterShare to FacebookShare to Pinterest
Durward Discussion,History,Politics Northwest Guardian, Only The Good Friday

What a great OTGF!! Brought tears to my eyes. Too bad we don't hear MORE only the good about all the people around us. Might make us a bit less cynical.

Wow. That gave me chills, Jamie. I love this.

Seth truly is a hero and probably even more so in the eyes of that little girl and her mother! It's great to read stuff like this - helps make up for a little bit of the negativity we get spoon-fed every single day.

THAT, my friend, is better than good. Oh, I must go cry now. I'm sorry I didn't get here over the weekend. My husband thought he should have some of my attention or something. Go figure. But, I got your sweet anniversary card, and I appreciate it.

I was very proud of my husband Seth that day after he told me what had happend! A little bit of shock and proud of how he handled it all..thanks for all the nice things you have said about him! he is in iraq right now.