What we consider as the "Old West" was for the most part the 30 years following the Civil War. Then civilization caught up with them and a lot of gunslingers were out of business and working at regular jobs. Wyatt Earp lived long enough to appear in a silent movie. He was a little more creative than most and had many romantic and personal adventures in his long life, some of which were probably true. Courtesy of a friendly biographer, his fame has become a bit more reel than real, but who wants to ruin a good story? On January 13, in 1929, Wyatt Earp died in Los Angeles was buried in a Jewish Cemetery in Colma which is another good story. Only a little over 25 years later, in 1955, Wyatt got to television for a seven year run in the form of actor Hugh O'Brian playing the marshall of Dodge City. O'Brian was born on April 19, 1925, overlapping the last four years of Earp's life. So much for major coincidences, and the idea that everything is connected to everything.

In 1957, I was a 13 year old who looked 16 enduring one my interminable summers in Fresno. One of the major Polio epidemics had happened in 1952. My stepsister was paralyzed from the neck down and confined to a wheel chair. As a result, I was very active in raising money for the Red Cross. The Salk vaccine had just been approved for massive distribution, but the money that had supported the research, now was helping to fund the injections for all school children. As part of a charitable campaign, Wyatt Earp came to Fresno. If you were female and had a pulse, you were in love with Hugh O'Brian.

On a dare from girlfriends, I took the money I had raised to where the local TV station was showing the telethon, but wouldn't turn it over until he kissed me. It was a rather decorous kiss, but the poor man ended up kissing virtually every woman in Fresno, including my grandmother who collected one on the cheek for each of her 12 grandchildren. He was a good sport about all of this smooching, but when I turned up in the late afternoon, O'Brian pointed at me and said, "You started this!" At which point, I got KISSED. Bent over backwards, strong hug, the works. When I came up for air and the knees were again working, I staggered off stage to an embarrassing round of applause from the audience. He would have probably been scandalized if he knew my real age at the time, if for no other reason than that this is a man who has dedicated his life to the development and encouragement of young people.

In 1957 the fans of "Wyatt Earp" stole the headstone of Wyatt Earp, so that now he has only a flat marker instead of the large monument. 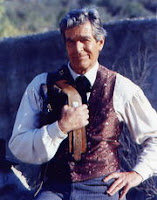 Another 20 years plus later, "The Shootist", John Wayne's last film about a former gunman coming to terms with the changes in the "Old West" and his own mortality is being filmed in Malibu and Burbank. Hugh O'Brian played one of the older gunmen who take him on in his last great gunfight, and Hugh still looked like a greyer version of the TV Wyatt. My son liked to go to the studios and the crews got used to him being there to run errands, so he met Hugh O'Brian and we own a reel of film for the opening of that movie as John Wayne shoots his way through history.

Mr. O'Brian was married for the first time recently at the age of 82 to his long time ladyfriend, Virginia Barber, so he is passing the older Wyatt in age if not quite in legend, all while continuing his charitable ways with his long standing HOBY Foundation. As a symbol of his humor, the wedding "to die for" while formal and celebrated by hundreds of guests was held at Forest Lawn Cemetery. In lieu of gifts the couple requested donations to HOBY.

So there you have it. Four generations covering 128 years connected by the same character and a little story: Wyatt Earp, Hugh O'Brian, me and my son from cemetery to cemetery. Write down your memories. History not recorded is history lost. I'll close with a bit of a speech given by Hugh O'Brian.

"I do NOT believe we are all born equal. Created equal in the eyes of God, yes, but physical and emotional differences, parental guidelines, varying environments, being in the right place at the right time, all play a role in enhancing or limiting an individual's development. But I DO believe every man and woman, if given the opportunity and encouragement to recognize their potential, regardless of background, has the freedom to choose in our world. Will an individual be a taker or a giver in life? Will that person be satisfied merely to exist or seek a meaningful purpose? Will he or she dare to dream the impossible dream?"
Posted by Durward Discussion at 12:09 PM

I like the stonehenge touch. May save that one for a solstice or equinox.

One more coincidence in all of this. Wyatt Earp was born in Illinois. Hugh O'Brian while born in New York attended school at New Trier High School in Winnetka, Illinois

I have two good ones of Stonehenge, I'll send em'.

Hugh O'Brian is not even Irish. He is really of Prussian (German) origin! Kaiser Wilhelm is rolling over his grave right now!

This is so cool, and you are right if you don't write it down it gets lost to time...Boy the Earps were a vigorous family. I understand that during the Civil War the Earp family was involved in recruiting for the Union Army. I read one story where Wyatt thought he would join up before he was old enough, and his father disabused him of the idea with a beating. Nicholas Porter Earp was a law man himself and very capable man. I can understand Wyatt not wanting to be separated from his brothers it seems they all were real tight.

Nicholas also served in Iowa as a provost marshal for recruitment; taking on the burden of sending local boys and men as well as his own sons Newton, James, and Virgil off to fight for the Union Army.

I must have missed this one when it originally ran. Thanks for the repeat and the story especially considering I've had kissing on the brain here lately though I have no idea why as it's been close to eight years since I've had one. Maybe that's why??