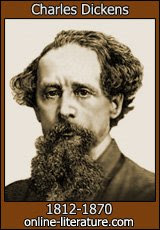 Right now we have a new President about to assume office. It looks as if the financial condition of the world is about to crash and burn. In individual lives homes are being lost on the bad end of things while others are giving thanks and others are falling madly in love.

Whenever something dramatic happens in the world or in our lives, we often think that somehow what we are living is different than what other people know. Fortunately for those going through such events, it helps to know that somewhere, sometime, to somebody, exactly the same things have happened and will probably happen over and over again. There is a whole bank of experience and wisdom to draw upon whether the events are tragic or happy.

Dickens was telling us that all times are like all other times. At some point there will be events great or small that will elate or terrorize the individuals living in them. Shelly over at This Eclectic Life published a wonderful blog article about living in the present, but while doing it she gave me an idea.

If you could live in any time and place, where and when would you choose? Do not be bothered by language considerations. We will assume you are part of the population for this exercise.

And to go along with the theme: The only song I know of that was written about reincarnation. Rodgers and Hart wrote this intro to the song that became one of the most recorded songs of all time, so it must be talking to someone:

The beautiful "Where or When"

Posted by Durward Discussion at 5:13 PM

Email ThisBlogThis!Share to TwitterShare to FacebookShare to Pinterest
Durward Discussion,History,Politics De ja vu, where or when

Mandy Patinkin has an absolutely beautiful version of this song on a CD that I have. I have always loved it.

I think that I would have liked to live during the Victorian period or whatever period of time it was when women could wear dresses that hid their "problem areas"!

Even though it was a very tough time here in the United States, I would also liked to have lived during the time of our nation's Civil War.

It's funny that you're quoting my favorite Dickens' book in this post as just this past Sunday I made my dispatch partner watch "A Tale of Two Cities" with me at work on Sunday. It was the Christopher Sarandon version where he plays both Charles and Sydney. I have always thought that I would have loved Sydney more than Charles were it my choice and not Lucy's. Such a great story with such a sad ending.

Ah, the sacrifices that some people will make for love ...