Hollywood Can Be An Ass 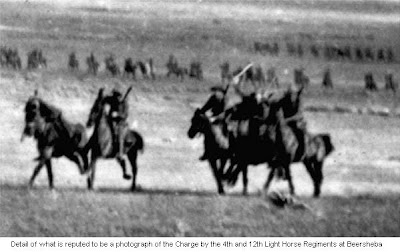 The only known photograph of the charge at Beersheba

It's been a while since I've delved into Australian history and you've all had a rest for awhile, so here is my latest about Australia, motion pictures, and everything Jackman.  There is a movie I would love to see made, so this is a free for nothing idea just in case there is a screenwriter and/or director out there with a fondness for epics, particularly since it would be a perfect vehicle for Hugh Jackman.

This past weekend must have been Hugh Jackman day on HBO because they were showing Someone Like You,  Kate and Leopold, and Australia.  Now I don't expect much from the first two.  They were what they were:  Fluff and more fluff.  Quite frankly I expected more from Austrailia as I've rattled on about before.   It was supposed to be the epic on the level with Lawrence of Arabia or the Southern Hemisphere version of Gone With the Wind.  It tried.  It really tried.  There was a great cast doing their best to rise above the material, but they couldn't quite reach over the sloggy script, the poor, film school level, match move and CGI, and apparently a director who didn't care about the details of history preferring insider references to Over The Rainbow and There's No Place Like Home.  Even when showing The Wizard of Oz he screwed up using black and white instead of the Sepia Tones that represented brown and boring Kansas or for that matter the dusty outback of Australia.  So you got a bodice ripper with nice scenery human, animal, vegtable, and mineral.  Despite it all I still like the movie except for feeling cheated of what it should have been.

What makes me the most upset is that Elton John wrote a great ballad about the iconic character of "The Drover" and no one paid attention to the lyrics.  There was a movie there and the powers that be ignored it.  All things considered, everyone was in the wrong script and the wrong war. Take "The Drover" from his birth before 1895 to 1915 and Gallipoli on April 25 to seeing his brothers die to coming home to a black wife in the form of a "Drover's Boy" because he couldn't really marry her in Austrailia of the period and she dies of Tuberculosis or more likely given the history:  Influenza.   Australia was hit so hard by those events that the population didn't recover and start growing again for almost three years.  Now THAT is a movie.

I wrote about "The Drover's Boy" poem before and Baz Luhrman really missed an opportunity to do something other than a cliche ridden cross between Quiggly Down Under, Donovan's Reef, and Rabbit Proof Fence.  Someday, he may forgive himself.  I won't until he gives me the drover who should have been in the movie.  Come to think of it, he doesn't have to give me The Drover as long as he gives me General William Grant and lets Hugh Jackman play him.

So who was General William Grant? The event: The Australian cavalry charge at Beersheba during WW I.   Looking at the close up photograph, it doesn't take too much imagination to see Jackman in the part and the story is one that would capture anyone's imagination.  We already know he can ride a horse. 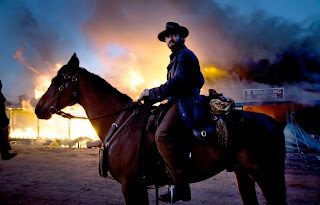 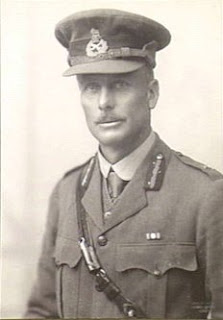 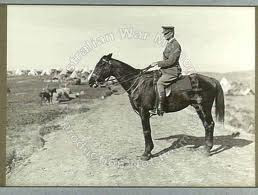 There is a description, photograph, and outline of the charge on Beersheba at the Light Horse History Pages.

The taking of the wells at Beersheba on 31 October 1917 formed the single most thrilling image from the Great War. The Charge of the Light Horse is the lingering memory. Many legends have arisen about the Charge which have become embedded within the national story and now seem to have replaced the facts, both officially and unofficially. These legends are addressed. The Battle of Beersheba was not only the famous charge but many other actions all of which culminated in the victory.  This is Australian history at its bravest and most exciting, not to mention that it helped set up the whole British occupation of the Middle East Palestinian mandate and the effects of that period with the division of Iraq and Iran and the establishment of Israel whose effects we still deal with today.  For a refresher on some of the events leading to the modern day Middle East, here is an article I wrote about Gertrude Bell.

As to story arc, I found the details on General Grant's family that he left behind, I used my Ancestry links to turn up the following: Wife: Eveline Ryan Woolcott Grant. Children: Mary Woolcott Grant, Eric Cragie Grant, Jean Alison Grant, Ian McPherson Grant, and Donald William Grant.  This means there could still very well be living grandchildren and great grandchildren that could fill in the story even more of a heroic man who despite his many awards and honors simply returned home Australia to become a grazier and passed away on the eve of World War II.

Anybody know any Producers and Directors? 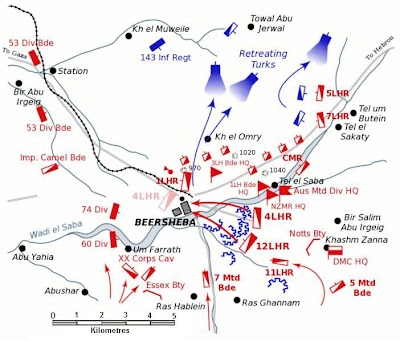 Posted by Durward Discussion at 2:10 PM

Jamie, I was prompted to view your interesting page through the link placed to the Australian Light Horse Studies Centre. These are always a pleasure to see. I thought I might assist you in some of your comments with some clarification.

1. The "Elliott" alleged charge at Beersheba photograph displayed at the top of your page has been properly analysed and found to be of another event. The only person who publicly defends the Elliott claim is Ian Jones for what ever reasons he has. You will see two entries on the ALHSC site debunking the claims to this photograph:

However, the Elliott photograph claim is one of those Zombie myths that refuse to die regardless of how many times one kills it.

2. Billy Grant. In the movies he is treated wonderfully both in Chauvel's 40,000 Horsemen and Wincer's The Lighthorseman. As with all things, myth and reality parted ways when the first shots were taken for the movies. Grant was not the modest man who faded away as a grazier as you have sentimentally portrayed him. Quite the contrary. His ego was such that he took credit for things that did not belong to him. The charge was one item. The planning and orders were delivered by Col Cameron, CO 12th LHR who had done this sort of thing in South Africa with great success. When Grant claimed all the kudos for the charge, Cameron was mighty upset and a hatred built up between the two of them which lasted many decades. The result of this egotism gave Grant charge of the most pivotal part in the invasion of Jordan in April 1918. His role was to secure the communications links with the invasion force to the Jordan Valley. When the Turks fired the first artillery rounds, he up and ran off leaving his whole brigade in disarray. So bad was it that Chauvel could not find Grant so he appointed another field commander to rescue whatever could be saved. The result was the loss of the only artillery battery during the Palestine campaign and the aborting of the invasion to Jordan and nearly the loss of a full Australian mounted division of 5,000 men. Grant couldn't be sacked because of the publicity given to him about Beersheba so he was never given any responsibility again while remaining the titular commander of the 4th Light Horse Brigade. The reason why Grant faded away is because his antics as a commander had been exposed in the post war era so by 1930 he had lost any credibility as a participant in the major events. Chauvel's letters of the late 20's regarding him basically state that Grant is a liar whose testimony is not to be trusted. You couldn't get a better endorsement than that.

I suspect the role would be better suited to Mel Gibson.

I ould watch him as well! Thanks for the history lesson. I would like a movie about Beersheba, but only with Hugh Jackman.

William Grant was such a spectacular man, and virtuallly no one outside of Australia even know who he was much less what he did.