"When you have a choice -- choose happy." 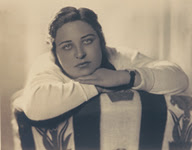 Before anyone really knew there was a NASA and before the world had honored the first astronauts by making them really famous, they hung out at a classy little joint named the Happy Bottom Riding Club located in the California high desert run by a middle aged lady who raised hogs. In the movie, "The Right Stuff", the actress playing Pancho Barnes is the one behind the bar and calling the newest test pilots "pudknockers". At her best as in the Hurrell photo above, she wasn't attractive.  In fact, Chuck Yeager called her "the ugliest woman he had ever known" but it was her fence where he broke his rib before flying the X-1 for the first time and her restaurant where he celebrated breaking the sound barrier.

Whatever fame she had was pretty well forgotten by the mid 1950s except among a small and select community. So why did all these men respect this woman almost more than any other they had ever met. Why was she honored by the Governor of California, praised by Howard Hughes, make friends with movie stars and astronauts, and why did General Jimmy Doolittle deliver the eulogy for her memorial service?

Do yourself a favor and meet Pancho Barnes on the link above and this trailer; then watch the full documentary next Monday on PBS on July 9. 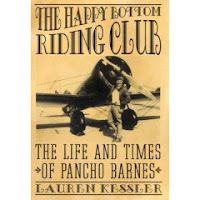 Posted by Durward Discussion at 6:40 AM

My dad was in the Air Force and is a lifelong student of aviation. He has a book about Pancho. She may not be a household name as famous as Amelia, but she probably should be.