The Happiest Place On Earth 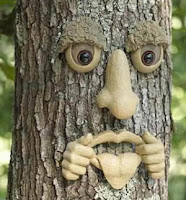 July 17 just happens to be the anniversary of the opening of Disneyland in 1955. While I didn't go on opening day, I did attend during the first month and several times a year from then until 1962 when I married and moved to Northern California which reduced my visitations to once a year for the next 20 years.

There are many stories to tell about the adventures on Tom Sawyer's Island, just ask any California female of my age group about the dating service at Merry Go Round Rock, or the course I could give how to get from land to land at record speed and avoid standing in lines or where they put the telescope in Star Wars and other trivia. That is for later years.

Now normally I wouldn't recommend dating outside of ones species, but I must confess that because of Disneyland, one very pleasant evening was spent romancing a deciduous growth. As you can see from the photograph above, he was a rather handsome tree.

In 1961 Disney had just released Babes In Toyland. To promote this event, the space just to the right of the entrance was given over to a walk through exhibit of the scenes of the movie with music. My girlfriend and I skipped this until the end of the day and thought we would make it the last stop. Once walking through the scenery and since we had been on our feet all day, it seemed like a good idea to sit on the low wall at the exit area until heading for the car. Leaning back against the very stationary forest also seemed wise until the tree said, "Please don't lean on me". Once the leaping up in startled surprise and shrieking stopped, I apologized for getting too familiar with his trunk.

My tree and his leafy friend indicated they were about to get off work and would we stick around for a while until they changed. Now until you have found yourself gazing into the eyes of a forest growth asking you for a date, you haven't quite exposed yourself to all that life has to offer. It was a pleasant one time evening due to geographic undesireability, but a pleasant memory only topped by the day I really did shrink the kid (story for next year's anniversary).

Happy Anniversary to the Happiest Place On Earth 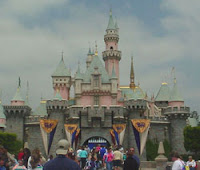 I love Disney!! I did a speech on Walt Disney when I was a freshman in college. The class loved it. Who doesn't love Walt Disney?

Disneyland is one of my favorite places! I'd completely forgotten about the anniversary.

My mom actually met my father at Disneyland.

This has been my longest drought - I haven't visited in six years or so.

I don't know your Mom's age, but if you father was in the service when they met, they both may know about Merry Go Round Rock.

I have never been there. I would like to see Walt's frozen body however. ; ) Cheer sJamie!!

Matt-Man. I think you would be more attuned to the ladies who flash when they are about to splash.

The camera pics are on the web.

I've been to both Disney Land and Disney World and I've got to say that I prefer Disney Land hands-down. I may be one of the few people in the world who feel that way but there's just something more magical about the Magic Kingdom in Anaheim then in Orlando.

My first trip to Disney Land was in 1965 when my Dad was stationed in Arizona and we took a vacation to California to see Disney Land and Knott's Berry Farm (back when it wasn't much more than a berry farm, I think!). I loved the entire vacation and remember especially the Jungle Boat ride and Magic Tiki Room.

In later years I lived in Southern California and had occasion to go to Disney again several times and I always loved it - maybe partly because I had such happy memories of a childhood vacation there.

I can't say that I ever got to date such a magnificent piece of bark, though! I'm sure you could tell tales that would make the Mad Hatter blush!

Great post - thanks for the wonderful trip down Memory Lane and for making me smile!