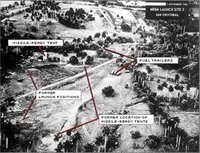 When you are doing genealogy, one of the techniques to use is an interview with older members of the family, not for facts but for atmosphere of the times they have lived. You need to do your home work ahead of time by getting as many "facts" about the period as possible. Coming up in October and November we have the anniversaries of two fairly major events. It will be the 44th for the Cuban Missle Crisis and the 43rd of the Kennedy assassination. Below is an example of what can be done with very little other than dry facts and a good interview.

In 1978 a teacher gave my son the assignment to write about the first year of his life. He fudged a bit by going from the October before to the November after. He had the idea to go to the library, find out what was going on, and then to interview me about it. Starting Out was the result.

Had she or hadn’t she? Sleeping pills, yes, but what? Thalidomide – the name haunted her and every other pregnant woman in 1962. Those babies! – Her baby? She was scared and would stay that way until next year.

El Camino Real – beautiful as only Northern California can be in the October sun. The radio blared away with the Four Seasons’ “Sherry”. They were young, a baby on the way, and happy – at least on this day. The President interrupted the music, “Today I have ordered a blockade of Cuba!” Suddenly their bright world was dark. They waited. The world waited. Six days later the Russian ships turned around and the sun came out again, but for how long?

“You won’t have Nixon to kick around any more” sounded like as good a promise as any following the November elections. Vaughn Meader had them all laughing with his satire of the Kennedy White House, “Goodnight Jackie. Goodnight Bobby. Goodnight Ethel. Do you have your bear, Teddy?”

“Puff the Magic Dragon” welcomed a baby boy into the world on February 21, 1963. His mother counted fingers and toes in time to the music. He was beautiful, perfect, loved. She was politically aware and terribly liberal, but at this moment, it didn’t matter that the South was in an uproar over integration or that the Supreme Court had reaffirmed the right of peaceful assembly. Christopher Alan was here and safe. Let the world take care of itself. She had bigger responsibilities.

The baby went to the movies right along with mommy and daddy. An infant-seat made seeing “The Birds” and “Lawrence of Arabia” easy. And to think it wasn’t that long ago that she thought Hula Hoops were the greatest invention ever!

Divorce was becoming the great American pastime. She was just one more casualty that May. There were lots of casualties – her kind and the “advisors” in Viet Nam. It was a time of commitment and she was supposed to care about the Green Berets, care about the Peace Corps, care about LSD and Timothy Leary, care about so much, but there just wasn’t time. Being a single working mother took all of her hours. Given her choice of trends to lead, this wouldn’t have been it. She and Tony Bennett had both left their hearts in San Francisco. Rod McKuen might think that love had been good to him. She disagreed. Oh well, McDonalds sold 15-cent hamburgers. At least she didn’t have to cook.

JFK was a Berliner at the wall, and Camelot was in full swing. Pope John XXIII died; the world mourned a good man. Fanny Hill fought its way through obscenity trials, while Bob Dylan led the war protesters with “Blowin’ in the Wind”. Martin Luther King had a dream near the Washington Monument – too late for Medgar Evers murdered the previous June and not in time for the four young girls bombed to death in church the following September. The US/USSR hotline was installed, and the “red phone” became a symbol of the unthinkable. Could anything else happen in this crazy year?

Los Angeles baseball fans were in heaven, and Kofax and Drysdale were patron saints! A four game sweep of the World Series had the city pretending it was New Year’s Eve, as confetti and champagne rained down on the heroes! Those beautiful no-hitter bums!

Her child was ten months old now, but for three days he slept almost constantly as if he understood that this was no time for a baby to cry. The tears fell uncontrollably from much older eyes. The drums of November marked a national tragedy. “Where were you when you heard?” would become the question a generation could answer. Kennedy dead and two days later his accused assassin died “live” on TV. On the television: the flag, the riderless horse, and the constant pictures of a nation stunned by grief. She hovered over the sleeping infant, her tears dropping on the blond curls. What have we done to you? What will become of you? Was there any hope left for the world or this new person? They would have to wait and see – together.
--------------------------

For those curious as to “then what happened”, Christopher has now turned 43. He is retired from the U.S. Army and now lives and works in the state of Washington. He is divorced with one son. His parents remarried only to divorce again seven years later (another story). He has a sister and two beautiful nieces.

His mother is a retired researcher, writer and editor and is still happily single. As with most of the country, she is no longer a sixties liberal and has settled somewhere around fanatically moderate Republicrat: Social issues left, fiscal issues right with more than enough exceptions in between to give anyone political schizophrenia.
Posted by Durward Discussion at 12:32 PM

I got you linked, but my page looks like hell. I don't know what I'm doing wrong and I just left a post for CB to see if he can help me figure it out.

I've been trying for the past week to get all the links in, but my luck is really bad. I believe it's Bush's fault. He screws up everything he touches and he does spy on those using the internet and those who oppose him.
LOL...LOL...LOL...

Well do what the rest of us do ... put on your tin hat with maximum adjustment for incoming messages. Bush et al do have extremely powerful invasive techniques. lol

Well I got it straightend out and your link is up and running. I just linked from my site too yours with no problems.

Them NSA AS*'* are really screwing us up, aren't they? Now this was what I would call TORTURE. Maybe worse than waterboarding.

I'll catch you later. Oh by the way, Craig's site still isn't up and I need to add his link yet, though I think it should go much easier now.

I even got the page ready for the other links I want to add, so I hope those go a lot easier then these did.

The Future Was Yesterday said...

Please extend my thanks to your Son for a beautiful piece of writing!! It was a marvelous walk down memory lane that had it's bumps, but incredible glory. One of the things that remain in my mind from those days is: "We did it our way."

jamie: I was just 13 when the Cuban Missile Crisis erupted. That was much worse for me to deal with than the foolish diving under the schoolrom seats during the bomb drills, because I sensed this was real, although I didn't fully understand it, I was scared a nuclear war about to happen. I didn't understand that maybe a war could be avoided. It seems more like FIVE years elapsed between that crisis and the 11-23-63 assassination than just 13 months.

The first vocal critic I heard of the US involvement in Viet Nam was from my grandmother who listened to news on a giant old radio and told us kids how wrong it was for the US to be considering sending more troops there. She died just a few days before April 30, 1975, when the US was finally defeated and got out.

WOW!!! Like mother, like son ... insightful, intelligent and talented. I wish I had been so very observant of my life passing before my eyes. Lately I find myself wondering how I got where I am today.