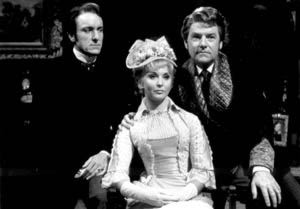 Because of my added question about moving words to screen while doing the Book Meme, I was reminded of a signature event in television . Anyone born since the 1960s has probably never seen a mini series that actually forced public organizations, including The Church of England, to change the scheduled day or time for events, and as a result of its popularity, led to a PBS program that still runs today in its 37th year. A shorter form mini series in color has since been done, but simply doesn't have the accuracy or magic of the 26 episode black and white original.

If you have never read Galsworthy's Forsyte Saga, it is a multi book soap opera masquerading as an historical novel. It has everything: seduction, romance, betrayal, violent attacks, heartbreak, gold digging, births, deaths, and family scandals over three generations. By the time you get through reading, every single one of the Forsytes in all their good and bad humanity have become members of your own family. In 1967, the BBC got it right. When the Forsytes were on, the nation stopped. A little delayed it was finally shown on PBS and miracle of miracles, water cooler talk the next day was all about what Soames and Irene had done the night before. Three years later, the popularity of The Forsyte Saga led to the creation of Masterpiece Theater and all the wonderful productions we have loved ever since.

The link above takes you to a site on the web that provides all sorts of detail about each episode, the actors, and events both fictional and real about the series. Your next stop is The Forsyte Saga, to buy the series which is something you really, really want to do. The following review from the purchase site says it all.

Please, oh please, watch this original b/w 1967 British version of The Forsyte Saga instead of the 2002 mini-series. You cannot compare the two...This 1967 version in contrast has perfect casting, a completely amazing script, multi-dimensional characters, why even the house at Robin Hill is more gorgeous in the original version! The DVD box set you can purchase off Amazon is well worth the price. Buy it before it goes out of print.

Posted by Durward Discussion at 12:17 PM

I have never heard of this series. I shall check it out Jamie. Cheers!!

Being only 9 in 1967 I missed this one but it sounds quite intriguing and definitely something I'd like.

Sure, Jamie, I've heard of the Forsyte Saga! I've considered teaching the book to my Continuing Ed classes (all ladies of a particular age). Great post and thanks for reminding me of Galsworthy's great novel.

Jamie, I have an award for you at my other blog: Answers to the Questions Come claim it! :)

Having been born in 1946, I remember the 60’s BBC series of The Forsyte Saga well.

I'll pass. Everything behind us is, well, behind us..