Take This Tune - A Grand Night For SInging 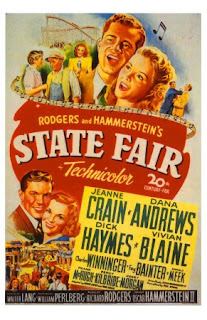 This is the first week of the Take This Tune meme. The full prompt and the other participants can be found at that link. My reasons for picking this as the first song has about three dozen answers so I may have to save some of the stories for later editions. The simplest answer is that it is summer and we are planning a trip to the Puyallup Fair this month when the grandson returns from his summer visit to his mother.

The real answer is that I picked a subject almost too broad and ended up with more ideas spinning around the brain from my love of old fashioned wooden roller coasters and Tilt A Whirls to my loathing for cotton candy or song after song that brings on memories of summers past. I finally went back to the original musical and a small bit of old Hollywood.

I adored Dick Haymes, the star of the original 1945 movie version of State Fair. If you are too young for that name to ring any bells, just go to You Tube and type in the name, seven pages will pop up followed by the word "next". In the 1940s his melodic voice was in head to head competition with Frank Sinatra. Among his many film leads in addition to State Fair were Diamond Horseshoe (1945) and The Shocking Miss Pilgrim (1947) both paired with Betty Grable, and One Touch of Venus (1948) with Ava Gardner as the Goddess of Love and beautiful love song "Speak Low".

Dick Haymes private life was a shambles of multiple marriages and alcoholism, but through it all, the magnificent, smooth baritone voice was a constant, singing some of the greatest songs in the American Songbook. My association with other than the music is a rather strange one. Never having met him in person, I was one of the 150 people or so who attended his funeral in 1980, not as a fan but as one of the representatives sent by the Los Angeles Musicians Union. A friend who was a Union executive didn't want to go alone and knowing how I felt about the music asked if I would be available on that day.

It was a small gathering consisting of family and long time loyal friends. He had been such a major star and many had hoped he would have made a comeback if not for the lung cancer that took his life. What for another singer might have been a Hollywood extravaganza, was instead a dignified tribute to a friend, colleague and father. Attending with a singer and musician meant that on the way home, I heard another voice singing another lovely song from State Fair:


Posted by Durward Discussion at 4:00 PM

Email ThisBlogThis!Share to TwitterShare to FacebookShare to Pinterest
Durward Discussion,History,Politics A Grand Night For Singing, Take This Tune

As always... great story. My contribution has been posted.

Thank you for taking part in the first "Take This Tune" meme.

Dick Haymes voice reminds me a bit of one of my mother's favorite singers - Jim Reeves. There weren't enough O's in the word smooth to describe Jim and Dick Haymes was the same way.

"State Fair" is one of my favorite old musicals - how could it not be? - and I've been known to belt out "It's a Grand Night for Singing" (off-key of course) from time-to-time myself.

For other Jim Reeves fans, check out Fairweather Lewis. She just wrote a nice bio and the music field is her area of expertise. From there is a new link for Music, Musi, music with the kickoff article on Theresa Brewer.

I've come here three times intending to comment & keep getting distracted! I was familiar with the 1962 version of State Fair (with Pat Boone & Bobby Darin). It was filmed in Dallas ... so of course I would be interested in it.
Had never heard of Dick Haymes.

I'm sorry I missed this first one. I got a little disorganized this weekend.

Today is only Tuesday. No change in the prompt until Friday. Tardy is just fine.