Be Thankful While You Can

A long time friend sent me a very long piece about the problems San Francisco has with retirement funds that are steadily exhausting its budget despite a constant cutback in services.  It is long, well written, thoughtful and lays out the problem that is now confronting all levels of government.


The following was my response:


That pretty well lays out the problem.  It is taking fewer and fewer human beings to do the work of the world, but what do you do with the ones no longer needed.  It is the problem no one wants to consider.  (Following sentence added thanks to a computer when 30 years ago I would have had to take the time to completely retype.):  Didn't mean to turn this into an essay, but that's the way it turned out.

When I first entered the work force virtually every medium sized town had a building that inside had jobs for 200 women.  Some major cities would hire a couple of thousand.  They were called telephone operators and all of those thousands of women are now retired, collecting social security and a large percentage of them additional pensions by whichever branch of the now defunct Bell Telephone that had employed them.  Every single one has been replaced by a instrument you can hold in your hand and the people it takes to build and service that little instrument are a tiny percentage of the original whole and don't live in the United States. (Not to mention all the services now done by an Ap on that smart phone that would have hired people just a few years ago.)
Now consider every labor intensive or pink collar occupation that could be done by someone with a high school or less education.  A single wage earner could support a family.  Now it not only takes two wage earners but on the lower economic end teens or young adults boomeranging home unless they are receiving some form of supplemental income such as welfare or food stamps.
In the Western world we used to have healthy middle class incomes and an economic graph that resembled a diamond with a small percentage of extreme wealth and extreme poverty on the top and bottom but the majority of earners in a broad, comfortable middle.   The distance between the lowest and highest incomes was much smaller than today.  We are rapidly returning to an economic model that resembles a pear more in common with a feudal era with more and more wealth concentrated in a tinier and tinier percentage and a level below them that services that wealth and then a large strata of poverty.
All of the above is bad enough but in the U.S. we have rewarded greed.  Instead of CEO's who used to earn 40 to 100 times their lowest employees, we now have a rapacious group that is bringing down 400 plus times their lowest paid worker with a tax percentage much lower than those below them (What Warren Buffett means when he says he pays a smaller percentage in taxes than his secretary).  Even this wouldn't have been so bad if that tax rate hadn't dropped from 90% on high income in the late 50's to less than 30% on only the top most income today.  To pay for that the Feds have ordered more and more unfunded mandates on to the states who have cut and cut services, infrastructure, and education while raising taxes and/or fees until we are way behind the rest of the developed world in things such as First class schools, high speed rail transit and bridges that don't fall down.  (Why all those Brits are rioting over educational costs and California's state colleges are no longer virtually free).  Then you can add in competition from cheap labor places such as China and India that actually have growing middle classes by being willing to allowing the existence of subsistence living, starvation, or low life expectancy due to pollution.
At the heart of all of this is not communism, socialism or any other ism.  It is that we simply don't need the bodies and the bodies we do have are rapidly exhausting resources in food, water, and energy.  Within 50 years unless we come up with some major answers, there will be all those steadily increasing elderly on the top and a huge number of totally unneeded group of human beings on the bottom because in an empty world such as existed earlier in history where each layer of wealth supported the layer above it and those not needed had somewhere to go where they were needed to colonize or develop, we will have a way too full world where thanks to computers, robotics etc the unnecessary have no place to go.  How angry do you think those people without jobs, housing, food, and water are going to be and just how much violence is that anger going to create?
None of the answers to the above are easy.  Can't even come up with a snap it out political sound bite.  All across the political spectrum, the panaceas proposed can be shot down in flames.  Anybody have any truly painful solutions that might work?
I have some ideas, but I'll let others weigh in first.  None of my possible combination of actions (won't call them solutions) will be easy, but they might alleviate long enough to get through without destroying each other. 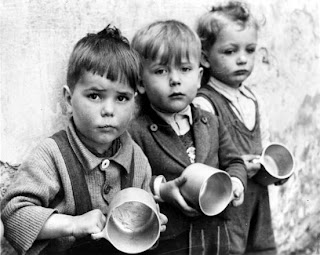 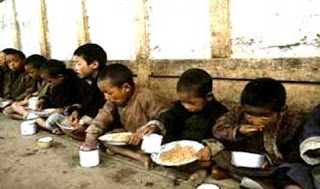 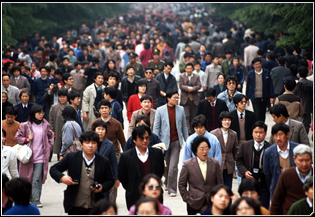 Posted by Durward Discussion at 7:35 AM

Good piece!! Gives me much to think about. I don't have any solutions, my god, serious stuff!

Excellent essay. It seems a pretty bleak future staring at us, doesn't it?

Oh if the above wasn't enough, take a look at the Worldometers Site

Jamie - I personally believe that the 20th century created two social experiments that did not work:

1 - the communist system, which folded because no one wants to work for a nebulous ideal, and there were no reward systems in place in their artificial economy

2 - the American post-war middle class bubble, which had never existed in the world before and was obviously not sustainable, because the unfortunate nature of humans is that too much is still never enough.

The wealthy became sick to death of sharing their chunk of the pie with the rest of us. But the weirdest part of their resurgence as gulping resource gobblers is the willingness of the Average Joe to go along with policies that permit this. It's not some arms' length Fed that changes laws to enable the obscenely rich to steal from you and me. It's the basic human desire for more, more, more. Average Joes don't want to change the laws that permit it because they are secretly hoping they can one day become one of those obscenely rich thieves.

Solutions? I actually have optimism for the younger eco-savvy generation. They already instinctively put two-and-two together and realize that individual consumerism habits can have a major impact on major world economies. It's not too big for us to solve.

Excellent thoughts. Tonight I watched the "Fixing The Future". on PBS. It is about sustainability, doing business locally, Small house movement, cooperatives on a large scale. Very interesting concepts for consideration. You can see the details at Fixing The Future

It helps with some of the problems in the developed world. It still doesn't solve the population problems but it is a start as the small loans or animals and local business development such as KIVA or Grameen help put people on the path to changing their environment and as a result improving their condition rather than living on subsistence handouts and constant hunger.

"To pay for that the Feds have ordered more and more unfunded mandates on to the states who have cut and cut services, infrastructure, and education while raising taxes and/or fees until we are way behind the rest of the developed world in things such as First class schools, high speed rail transit and bridges that don't fall down."

And you're right, those stuck on the bottom will become an angry nation of bitter souls with no way out but violent means. Thank you for saying out loud what so many of us are thinking.

Where are the real game changers in our world? Where ARE they?