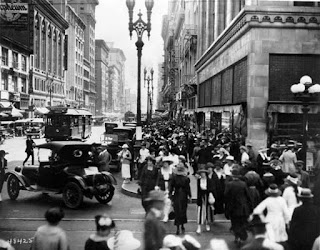 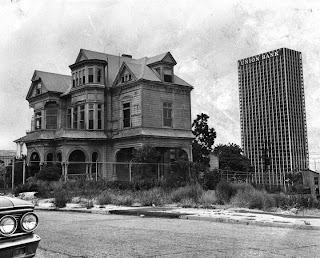 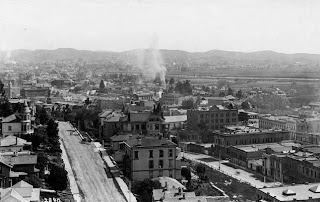 Downtown Los Angeles
This week's Take This Tune is Mary Chapin Carpenter's "I Am A Town" where she sings of the little towns of the Southern United States that are either disappearing completely or are absorbed in the sprawl of some mushrooming city.  To join in, click on the link above for a prompt for your blog.

The town of my childhood has never been truly small but there was a time when Dorothy Parker is supposed to have called it, "72 suburbs in search of a city".  Now I don't remember it as the pictures of circa 1910 above, but I do remember it from mid century when very distinct towns were separated by wide expanses of farm and grazing lands.  It was a time when people could laugh at Mel Blanc's routine on the  Jack Benny Show about the railroad that joined them with "Anaheim, Azusa, and Cucamonga".   The site of TV Acres remembers it fondly as:


After repeated announcements, the train caller continued "Look we're not asking much. Two of ya, or even one of ya...just somebody to keep the engineer company."

And still later "Please, please! I'll get fired if I don't get somebody on the train for Anaheim, Azusa and Cuuuu-ca-mon-gaaa!"

Now of course, it is one unending sprawl of non stop freeways, houses and businesses from the far northern end of the San Fernando Valley with little interruption all the way to San Diego.

There are still parts of California's Central Valley that resemble the small Southern towns peopled by descendants of transplanted families fleeing the depression Dust Bowl, and you can still see the ramshackle roadside businesses slowly turning to dust as Fresno and Bakersfield reach out to each other in even more suburban sprawl. It is change. For the better? Not quite sure. Still we are all familiar with the places where you can't go home again because as Gertrude Stein said about Oakland, "There's no there there."

Apparently this subject is universal in its appeal as in addition to the wonderful Carpenter song of the south, we can also get memories of the east coast with Paul Simon and "My Little Town"

Come join Music Monday and share your songs with us. Rules are simple. Leave ONLY the actual post link here and grab the code below and place it at your blog entry. You can grab this code at LadyJava's Lounge Please note these links are STRICTLY for Music Monday participants only. All others will be deleted without prejudice.
Posted by Durward Discussion at 6:51 AM

Email ThisBlogThis!Share to TwitterShare to FacebookShare to Pinterest
Durward Discussion,History,Politics I Am A Town, My Little Town, Take This Tune

I remember driving from northern to southern California on vacations to Disneyland, Universal Studios, Balboa Park, and Marine World. The drives always seemed so long because there just wasn't much to see on those long stretches of I-5 or Hwy 99, depending on which route you took.

Well, nothing but cows, pastures, and farms.

As I got older and started to make the trip on my own, it seemed the trip got shorter as more little towns expanded and bumped against their neighbors. Still the same distance and number of hours on the road; just more to look at.