Dance Me To The End of Love 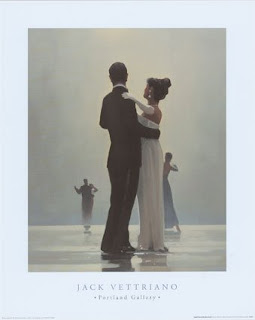 I've been staying away from the political for awhile simply because it's bad for my blood pressure and I don't want to get into a firefight with any of the regular readers. For those who support the current administration, know that I don't think less of you for having an opposing opinion, and I hope you will take the time to read to the end.

To know where I'm coming from, you should know that my principal obsession is genealogy. At least one male member of my family has served this country since before it was a country. There were men in the French/Indian wars with George Washington. There were men with those "well ordered militias" in the 1700s. There were men among the Revolutionary soldiers and yes I could join the DAR if I wanted to do so. There were men on the U.S. side in 1812 when the British wanted to take us back.

Both of my great grandfathers were in the Civil War/War Between the States (take your pick as there was one on each side). There was family with Teddy Roosevelt on San Juan Hill. Even the Scottish branch got into things with WWI.

My father was career Army and served in WWII, I never met my father-in-law because he died at Chosen Reservoir during Korea. Various cousins were in Viet Nam. My son was career Army just like his grandfather. He served in Gulf War I and he still works overseeing the delivery of the Strykers to units in Iraq to keep those men and women as safe as possible. So whether the country was right or wrong, my family has either volunteered or answered when called. They have followed civilian leaders into fire simply because that is what military families do.

This is only to explain why if some right wing idealogue who has never served a day in their life wants to accuse anyone in my family of "Cut and Run" or being a "Defeatocrat", they have a fight on their hands. Having said that, if you wanted to express my attitudes toward this President, you would have to set your keyboard on "Caps Lock" and use the whole top row at least twice: !@@##$$%%^^&^&amp;amp;amp;amp;amp;amp;amp;amp;&***(*()_)_++_))(**&^^%$%$##@! simply because he is a total obscenity and the sooner he and his totally inept, criminal cohorts are out of office, the better off this nation will be. I've been aware of Presidents since Harry Truman. Some I liked and some I found lacking from both the D & R columns, but this one is simply the worst. He has no business being in that office. He has cost this nation both lives and treasure for the sake of his own ego.

Now I happen to be upset with all the Democrats who voted for entry into Iraq as well. Way back when I was saying that anyone who knew anything about the Middle East, who knew even a small piece of the history of Iraq, who had even a grain of common sense would have known that this invasion was a truly bad idea. Following 9/11, I had been for the invasion of Afghanistan and told everyone I could tell that Iraq was not the next logical step. It is one time when I wish to hell I could not say, "I told you so!".

The result of that lack of research, failure to investigate, and total bullheadedness in pursuit of a failed policy is shown below. There are families out there. They have folded flags of men and women who have done their duty simply because it was their job to do it. They get up every day and assist those with missing limbs and fight a bureaucracy that forgets them when they can no longer be thrown to the wolves. They deal with divorce and mental illness caused by family members who have seen too much death and destruction and bring those problems home.

Just turn on your TV. The numbers of U. S. dead are growing at the rate of over 200 a month while George Bush refuses to even set the most minimal of "guidelines" for bringing them home. The numbers of iraqi dead and wounded are horrifically higher. How much hatred can we stand to create?

A commenter on a recent post below suggested that I listen to a song I had never heard simply because it's title was the same as a painting I love: Dance Me To The End of Love. It is a beautiful video and a wonderful song. It is not specifically anti-war. It is just about endings. Iraq needs to come to an end before too many more brave families are required to say Goodbye.

DANCE ME TO THE END OF LOVE

Posted by Durward Discussion at 3:27 PM

An evil, evil man. Your thoughts are interesting and insightful. I shall return!

We can only hope and pray that like the Nazi Hunters after World War II there will be the new Nazi Hunters who hunt down every single one of these SOB's and render them to the Hague to stand trial for their War Crimes and Crimes Against Humanity.

I pray that there is nowhere they can hide and they will have too look over their shoulders for the rest of their lives.

I am a veteran myself and share your ancestral stories, though in my case there's nary a Yankee among my dozen and a half civil warriors.

You dont have to include disclaimers to your opposition to the Bush policy. You are in the majority, as to how wide the margin is, that's debatable. The Democrats in the House and Senate do seem to have a plan for a phased withdrawal with benchmarks or a timetable. Funding for the troops will go on, and Bush knows it. Any funding cut off is far in the future, even if he signs the bill.

Think how many would have been spared if the mission really was accomplished that day.

And on a lighter note, my great-grandmother would have called it the "War of Northern Agression." ;)

Now great grandfather Pifer would have begged to differ.

Jamie, Glad to read that you like Leonard Cohen's Dance me to the End of Love. He is a poet, first, and musician second. His music and lyrics make you think long and hard about the meaning of life. His album, The Essential Leonard Cohen, is a great primer for someone new to his thirty years of work. There was a film released last year, I'm Your Man, that wasn't distributed very well. I haven't seen it yet. 9/11 Survivor gave a partial review on CL when it was first released.

Thanks for stopping by my blog site. Your encouragement is appreciated. As are your posts. Will you let me know when you're really upset -- LOL!!!

I think so many Americans are absolutely at wit's end about this administration and are totally frustrated. As Nash said today, there are some small cracks in the walls of ShrubCo now with the Congressional Democrats excercising oversight -- for the first time in more than six years. Maybe the free ride toward a Republican dictatorship is over.

I do not agree, but you have the right to say what you want, as I do.

Women on the Verge said...

I agree with anon paranoid... this crew in front of a war crimes tribunal would bring a tear of joy to my eye...

And THANK YOU... as the wife of an Iraq vet I'm sickened every time I hear one of these chicken hawks label those who want us out of this illegal travesty as "cut and runners". Exactly what sacrifice have THEY made?????

I can see that you are very passionate. I do not like to get into politics either b/c there are way different views on the spectrum. It's a shame that we are losing so many lives, though and what are we (or anyone for that matter) gaining from this war?