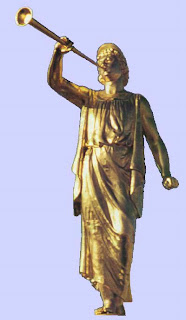 As everyone knows by now, I love to tie historical events to current happenings. Today we have a biggie in that regard. It is the 77th anniversary of the establishment of the Church of Jesus Christ of Latter Day Saints (Mormons). As you also know we now have the first Mormon, Gov. Mitt Romney, to run for the Presidency of the United States. Barring the late entry of someone more interesting, if I were a Republican (used to be not any more), I would probably vote for Mitt, if only because he seems to be the most decent and basically capable man in the race.

While I am not a Mormon, I did spend a great year in Salt Lake City and loved the area. Second, anyone who pursues genealogy owes them a great big smacking kiss. Because of one of the tenets of the faith to research their families, they have the single greatest depository of genealogical information in the world complete with copies of original records.

For a price that ranges from absolutely free to a minimal charge for microfiche rental or computer use, they make all of the records gathered by the church available to everyone at any of their Family History Centers worldwide and most libraries. (If you want it available from your home computer there is a reasonable yearly fee). Members have spent thousands upon thousands of hours indexing parish documents and recording cemetery information from the eras before civil registration. Then they have just handed this information to the world.

So catch up on a little history, take a look at a pretty good candidate, visit Salt Lake, and if you get a chance thank a Mormon for those records.

P.S. The angel at the top of this page is named Maroni. The beautiful building at the bottom is the LDS temple in Salt Lake City. If you get a chance you should see both up close. The music is the Mormon Tabernacle Choir.

In Fayette Township, New York, Joseph Smith, founder of the Mormon religion, organizes the Church of Christ during a meeting with a small group of believers.

Born in Vermont in 1805, Smith claimed in 1823 that he had been visited by a Christian angel named Moroni who spoke to him of an ancient Hebrew text that had been lost for 1,500 years. The holy text, supposedly engraved on gold plates by a Native American historian in the fourth century, related the story of Israelite peoples who had lived in America in ancient times. During the next six years, Smith dictated an English translation of this text to his wife and other scribes, and in 1830 The Book of Mormon was published. In the same year, Smith founded the Church of Christ--later known as the Church of Jesus Christ of Latter-day Saints--in Fayette Township.

The religion rapidly gained converts, and Smith set up Mormon communities in Ohio, Missouri, and Illinois. However, the Christian sect was also heavily criticized for its unorthodox practices, such as polygamy, and on June 27, 1844, Smith and his brother were murdered in a jail cell by an anti-Mormon mob in Carthage, Illinois.

Two years later, Smith's successor, Brigham Young, led an exodus of persecuted Mormons from Nauvoo, Illinois, along the western wagon trails in search of religious and political freedom. In July 1847, the 148 initial Mormon pioneers reached Utah's Valley of the Great Salt Lake. Upon viewing the valley, Young declared, "This is the place," and the pioneers began preparations for the tens of thousands of Mormon migrants who would follow them and settle there. 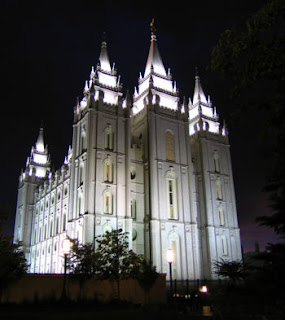 Posted by Durward Discussion at 5:40 AM

A follower of Smith, and a rival of Young, left the faith from an Ohio branch and went to Beaver Island, Michigan. Where he set himself up as a KING!
The only monarch recognized by the US government within the 48 contiguous states!

And this is why I love the internet: Between 1848 and 1856, the Mormon self-proclaimed King of Beaver Island and duly elected representative to the Michigan State Assembly between 1852 and 1856, James Jesse Strang, influenced life on the Island as well as in the state assembly Michigan. Lake Geneserath and Jordan River, place names in Peaine Township, both show his influence, as well as the formation of Galilee Township.

Your post reminded me of the great genealogy work the Mormons have done. Thanks

I still haven't started on the things you sent, but perhaps this next week. I had no idea the Mormons did this. Very interesting piece of history.

Ah, but you left out the reason WHY the Mormons do all of this great genealogy work that they do. As many good things are there are about their faith, family values being one of them, the whole "Baptism of the Dead" has never set well with me.