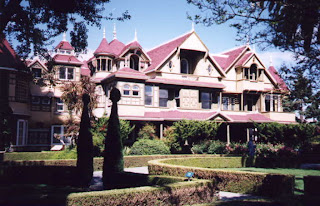 April 18 is the anniversary of the Great 1906 San Francisco Earthquake.

South of San Francisco on that day an elderly woman was trapped in the bedroom of her massive home as a result of the quake. It took the servants several hours to find her because she never slept in the same bedroom, but moved every night. Once rescued from the terror of the quake that had destroyed almost four stories of her seven story home, she made sure than all rooms were visible from outside the room and resumed building just as she had for years before the quake.

SARAH PARDEE WINCHESTER (1839 - 1922) was a woman of extremes. One of the wealthiest heiresses in Gilded Age America, she spent nearly 40 years as a recluse, building a mansion so bizarre that even today The Winchester Mystery House draws millions of visitors from around the world eager to decipher its many mysteries.

Following the death of her husband Sarah feared that the spirits of all of the people who had died as a result of her husband's Winchester rifles were trying to kill her. A spiritualist medium convinced her that if she never stopped building, the spirits could not reach her. The result is 160 rooms built over 4 acres with an intriguing hodgepodge of stairs that lead nowhere, second floor doors that open to outside empty space, mysterious slogans and words entwined on tiffany windows and in elaborate mantles, and spy windows built into floors to view the rooms below.

Do take the time to click on the link above for general information and video below for a short tour. Should you be in California, this relic of the Victorian age and California history is not to be missed. 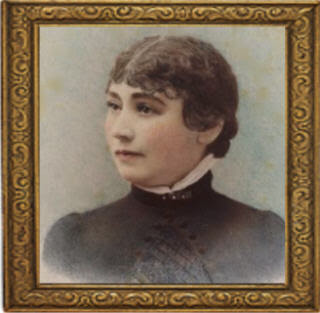 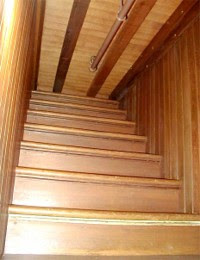 Posted by Durward Discussion at 5:33 AM

I was there when I was very young and remember dead-ended hallways. A very strange woman, indeed.

I never did get a chance to see the Winchester House when I lived in California, I wish I had as just the history of the house fascinated me.