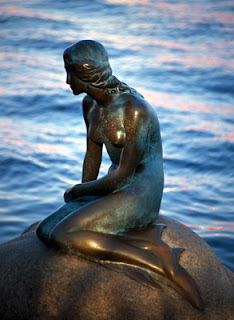 
Today I had a choice between the Bataan Death March and the birth of Hans Christian Anderson. Considering the climate of the times I decided to go with the girl who walked on knives rather than the men who walked in front of bayonets.

With the Brothers Grimm you always had happily ever after following a time of terror and challenge. With Anderson, you got a more bitter sweet reality. In his stories, the major character rises to the best they can be despite terror, cruelty, and seeing hopes and dreams dashed.

Look at the world around you: War, poverty, disease, disaster. It would be easy to to get dragged down into the negative. So look again: Love, charity, and heroism.

So there she sits on her rock, heroically looking out to sea rather than back towards grief and loss. Maybe we can all learn from the example.
Posted by Durward Discussion at 4:23 PM

This is a nice application. Thanks for posting...

Gorgeous shot. Is it yours?

I wish it were. No it is off promotional information for touring Denmark.

I have seen the copy in California, but that is about as close as I've gotten.