It seems that everyone famous has at least one relative who causes them anguish either public or private. Rudy Giuliani's children hate him and don't mind telling the press at the top of their lungs. Mike Huckabee's son likes to slaughter animals and we all got the news that Al Gore's son can make a Prius go 100 mph. Over the years the famous and successful have had brothers, sisters, parents, and wives who just happened to do something aggravating right when it was inconvenient to do so. It is almost as if families only have so much talent, success, or fame allotted to them. When that allotment gets spread around evenly all is well, but when one member gets the biggest share, the others just don't quite behave the way they should.

Lest the modern crowd of Carters, Hiltons, Clintons, Huckabees, and Gores think they are being persecuted, take a small lesson from history. 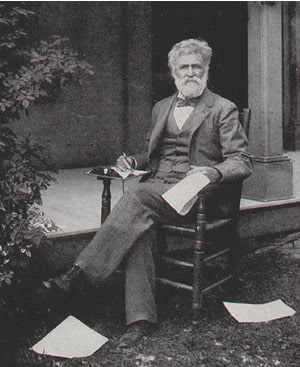 Orion is a field which grows richer & richer the more he manures it with each new top-dressing of religion or other guano.

Although 10 years his senior, Orion Clemens maintained a very close relationship with Sam throughout their lives. Born in Gainesboro, Tennessee, Orion was 15 when the Clemens family moved to Hannibal, Missouri. In 1849, Orion bought the Hannibal Journal newspaper, which he renamed the Hannibal Western Union. It was at this paper that Sam began his writing career, coming to work for his brother in 1851. Orion married Mollie Stotts in December 1854, and the couple moved to Keokuk, Iowa, where Orion started a printing company. About a month later, Sam and Henry Clemens came to work for Orion, but were forced to leave when the company became a financial flop. With his lack of success in the newspaper and printing businesses, a pattern of failure was emerging that would plague Orion during his lifetime.

Good fortune shined on Orion briefly when he was appointed secretary of the Nevada Territory by President Lincoln's attorney general in 1861. With the election of Nevada's first government as a state, Orion found himself out of a job. The stigma of failure continued to burden Orion.

After several years, Orion headed to New York, where he worked as a newspaper proofreader. By this time, Sam Clemens was becoming an established literary celebrity, and was earning enough money to regularly contribute to Orion and Mollie. In 1870, Sam got Orion a job with Elisha Bliss' American Publishing Co. as an editor, but he lasted in this position for only two years. The couple moved back once again to Keokuk, where Orion had a string of business failures, including raising chickens, practising law, and writing a novel. By this time, they were depending fully on Sam's contributions for their livlihood. In the early 1880s, Jane Clemens, Sam and Orion's mother, came to live with him in a house bought by Sam. Orion died in Keokuk in 1897.

Mark Twain seems to have truly loved his brother, and Orion seems to have been a genuinely good man who for what ever reason could never make his way in the world. So you have one genius known world wide and one brother who never amounted to much of anything other than being a brother. Perhaps that was enough for love to handle when fame couldn't.

Posted by Durward Discussion at 12:43 PM

Every family has it's issues I suppose.

Nice post. And it is something I can relate to. Have a good weekend Jamie. Cheers!!

It sounds like Orion at least tried his hand at many things and wasn't just content to ride on his brother's coat-tails. Nor was he a major embarrassment to his brother.

I came this close to taking the girls to the Mark Twain House when we were in Hartford on Friday but we just didn't have the time to fit everything into one day. Perhaps that will be a future trip.