It Pays To Know Where You're Going

Awhile back I posted a little quiz. Linda of Are We There Yet was the only one who took up the challenge and was therefor declared the winner of the Grand Prize: A blog article on any subject of her choice. You will have to ask her why she decided on "The Donner Party" since I am assuming this is of historical interest since she seems to be too sweet a lady to have many cannibals hanging from the family tree.

Do Not! Repeat Do Not! enter "The Donner Party" into Google as a search item. What will turn up is a result of 2,010,000 individual articles. So what is a different enough tack to take to justify number 2,010,001? What made this one group of people among the thousands traversing the Oregon Trail more important than any other group? The answer is a simple one, they really weren't very different and not particularly important except as many travelers have found to their sorrow, they were taken in by a shyster and got lost.

1843 - The beginning of the great migration. While some people other than Indians had settled in Oregon prior to this date, they were principally mountain men or explorers from other nations (France, England, Russia). This year started the flow across the American West that then reached it's crescendo following the discovery of gold in 1849.

And this is the point where the know it all who didn't enters the picture. Just beyond Fort Laramie they met up with Wales Bonney Carrying a letter from Lansford Hastings suggesting that the wagon train could save time by taking a newly discovered shortcut named, you guessed it, "The Hastings Cutoff". Although they were warned by experienced travelers not to risk the uncertain shortcut, the Donner Party broke off from the Boggs Company in hopes of saving 300 miles on the route to Oregon. For the exact timeline and events, you can read The Donner Party.

The tribulations faced on this shortcut that was neither shorter nor easier made them late entering the Sierra. Once more the shyster enters the scene with a note stuck on a bush saying to send one person ahead to meet him and he would return to guide them. Once more, Hastings doesn't keep his word but points out another possible route through the mountains that they follow reaching the base of the summit on Halloween just as it was starting to snow.
They had come 2,500 miles in seven months to lose their race with the weather by one day, only 150 miles from their destination of Sutter's Fort (what is now Sacramento) in California.

Over the next four months, the remaining men, women, and children huddled together in cabins, make shift lean-tos, and tents. The cattle had all been killed and eaten by mid-December; one man had died of malnutrition. The people began to eat bark, twigs, and boiled hides. One group made it through to Sacramento though half of them died in the effort.

There were several rescue attempts though these were as dangerous for the rescuers as for the few people they were able to get out. In addition, they could only transport small amounts of provisions to leave with those still stranded. George Donner and his wife died at the camp, along with his brother Jacob and Jacob's wife, and most of the Donner children. James Reed, reached Sutter's fort. Reed's family survived. Other families included those of Patrick Breen (all of whom survived), William Eddy, Franklin Graves, and others many of whom died. In total, of the 87 men, women and children in the Donner party, 46 survived, 41 died.

The last survivor was brought out in April. He and others were accused of cannibalism, and even murder. The surviving members had different viewpoints, so the picture of what happened is not clear. The news spread east with gory tales of men and women dining on human flesh. To this day it has not been confirmed that cannibalism had taken place, though there are mentions in diaries. Recent archaeological excavations have failed to turn up any human bones with teeth marks although there are many of rabbits, dog and small rodents, so if there was cannibalism of already deceased, to this date no physical evidence has been found.


Looking down from Summit, you can get a clear view of Donner Pass and Donner Lake named after the fated party. It is not hard to imagine how rough this terrain would be in the depths of winter. The Sierra is beautiful but it can also be deadly. Recently a man, his wife and their baby were in the Sierra. They got lost taking an unfamiliar road that was shut down and not plowed in winter. The man tried to hike out. His wife and baby were rescued by searchers over a week after being stranded but he froze to death in the effort to seek help. 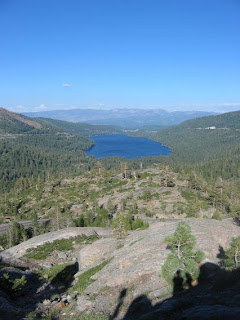 Thousands upon thousands of people made the arduous trip from the civilized east to the danger and hope of the west. During the six months of the trip on either the Santa Fe or Oregon Trails, they married, had children, and persevered in the face of horrendous obstacles. Many died of illness, injury, or violence. One song more than any other probably captures both the wistfulness and hope that took them forward. Almost everyone knows it, but seldom think what it meant to start the journey across the wide Missouri.

Posted by Durward Discussion at 8:37 PM

Thanks, Jamie, for the post today on the Donner Party. The Oregon Historical Society published several of the diaries of women who had made the trip from Missouri to Oregon. Their tales are unbelievable as to the hardships they faced. In the Oregon Trail Interpretive Center in Baker, Oregon, there are many exhibits to ponder the fate of these folks who made the trip.

Although the American pioneer is now routinely laughed at as old fashioned, I still cant forget the rush i felt the first time i read about the settlers who actually made it through those Rocky MTN passes. It is really amazing.

I think this is one way that historical scholarship has gone down a bit. We lose a little of ourselves when we forget to remember the heroes of the times, even those who were flawed.

Just as I had expected, a marvelous job on a piece of our country's history that people have either forgotten or never heard about. In addition to warning of the perils of a breathtakingly beautiful land, this post also warns of the dangers of taking unknown shortcuts or taking "the easy way out" of something.

The fates were not with the Donner Party at all and to think that they missed their chance to arrive safely at their intended destination by just one day is horribly ironic yet not all that uncommon. So often we fall short of our goals by such a slight margin.

Thank you for this terrific post and also for the great link that you sent me, too. Have a wonderful weekend and you're right, no cannibals hanging off the branches of the family tree that I know of; I'm just fascinated by our western history and the perseverance and indomitable spirit of those who settled the West.

The Donner Party story is one of incredible hardship and indelible courage.

Thanks for the insights.