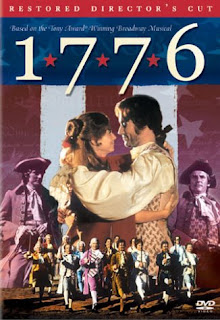 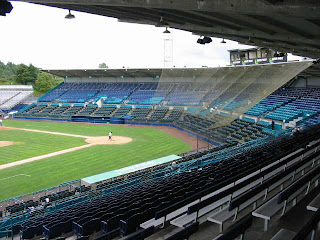 The two pictures above represent our family's Independence Day traditions. On July 3, we attend a Tacoma Ranier evening baseball game.. It is almost always beautifully warm and the stadium is always full. The game is with our great rivals from Salt Lake City. Once the game is over, blankets are spread on the field and as the sun goes down, people bundle up a bit and the children snuggle in on laps for the fireworks that last for another hour.

On July 4, we have the yearly viewing of the musical 1776. At least once a year, every American should watch this musical about the signing of the Declaration of Independence. The characters and the issues are vividly and frankly portrayed, and we see the founding fathers' faults as well as their virtues. The courage, the strategy, the dream of freedom, and even the tragic compromise on slavery are all there. If we didn't know how it all turned out, the suspense would be unbearable.

What makes this musical remarkable is that the actual speeches and letters of the founders are used as the source material for the script and songs. If you hadn't read the letters between Abigail and John, you might suspect that the movie was being a bit racy, but it's not. Those two really liked each other ... A LOT! Ben Franklin was racy all by himself. He gives "dirty old men" a good name. What is more important it doesn't dodge the hard topics ... the sacrifices made in war, the problem of slavery that couldn't be solved and still create a nation.

Those two issues are sung in "Mama Look Sharp" and "Molasses, To Rum To Slaves". Even after a quarter of century watching, these two songs still give me cold chills, because they are issues that we are still dealing with in our modern society: The sacrifice of the soldier to preserve our independence and the aftermath of slavery that still leaves a percentage of our population without the full blessings of liberty.

In this time of war, many of us are separated now by opposing viewpoints. What we all agree on is that this experiment in liberty has continued now for 231 years. To make it work we need to respect the opinions of others and their rights to express them. So go do whatever your family does on this birthday of America: Cook out, go to a game, visit a cemetery, play sports, have a big family meal - whatever are your traditions. While doing it, you might take a moment of two to read that Declaration of Independence for as good ol' Ben said, "If we don't hang together, we shall certainly hang separately".

Posted by Durward Discussion at 9:47 AM

Fascinating. I find it interesting that the entire room sat there so passionless. The dichotomy in this interpretation is curious, because slavery surely was the hot button issue.

I've never seen this movie, but perhaps I should give it a go.

Before this song they are fighting and almost coming to blows, but this song stuns them and following it, the Southern Colonies all walk out. What it takes to bring them back is at the heart of what eventually led to abolition movement.

Happy MM, Jamie - hope your team pulls out a win!

Have a wonderful Fourth!! My husabnd grew up in Tacoma!! He misses it so badly :) Happy MM!

Have a great Independence Day Jamie. :)

Very nice use ! In Belgium we celebrate on July 21 and it's called "National Day" the festivities are almost the same.

For July 1, I did a post for our Canada Day. Today I have a Manic Monday up about independence. On July 4th I plan to have a post up to wish my US friends a good celebration.

I hope you take time to check out my blog and all these posts.

Great thoughts for the fourth- I am headed down south, will be checking back in at the end of the week. Keep the flag flying!

I love that Ben was a dirty old man. Makes me like him, even more. Perfect people are boring and are mostly an illusion, anyway.

Great post and great times Jamie. 1776 is one of my favorite movies of all time. It's a shame that as we celebrate Independence our VP is a cryptic fear monger, and our Commander-in Chief is a "god-fearing" jingoist. Cheers!!

Thanks so much for sharing your wonderful family traditions, Miss Jamie! Have a great Independence Day!

Friends and families coming together to celebrate independence day, too bad Republicans and Democrats cannot do the same......

I think the greatest thing is that you celebrate this time of year with Baseball. As should every American. ;)

Wishing a wonderful Independence Day to you and yours, Jamie!

I was allowed to join the 4th celebrations while I was in the US - I will never ever forget this!

Hope you all have a great time.

Have a great 4th. jamie.

And your right they must all hang together. Everyone of them SOB's who implemented the Torture Policy.

I hope they can build a big enough gallows too hold them all on execution day.

On that day we will all celebrate our 2nd Independence Day.

Very cool tradition! We are kind of lazy on holidays, but this makes me think that we should make our own tradition. :D happy MM!

Well done! I used to assign the film 1776 for one of my American Government classes when still actively teaching. (Now, I just try to be Ben Franklin! LOL!) I think the students enjoyed the film along with reading to them some parts of David McCullough's John Adams. Great MM post.

Excellent post, Jamie, and I guess I shouldn't be surprised at all that "1776" is one of your favorite movies! I have watched it more times than I can count and have even had the pleasure of seeing it performed on Broadway several times. (Brett Spiner made an excellent John Adams!)

The relationship between John and Abigail is what I would call one of the great romances of all time even though they spent so much time apart due to his political circumstances. Because of this movie, my cousin and I made the trip to Quincy, Massachusetts to visit the boyhood home of our Second President as well as the other family homestead. So many people forget about John Adams in the wake of George Washington but the man was a genius, as was Abigail.

Have a fantastic Fourth of July holiday (I will be spending it at work as per usual) as we celebrate the birth of our nation.