Tomorrow I will be doing a post on women in power.While waiting for that,here is the story of one woman who wasn't a success. That failure may have been as much the fault of the men who advised her working on her flaws to eventually cause her death by a cousin who was a rip roaring success because she defied many of the men who tried to give her advice.

One of my favorite poets is Joseph Brodsky. In a tour de force bit of writing, he wrote 20 sonnets about one statue: That of Mary Queen of Scots. One of these seems to capture the problems in her life.

The number of your lovers, Mary, went
beyond the figure three, four, twenty, Twent
y-five. A crown, alas, gets dented, bent,
or lost between the sheets with some odd gent.
That's why a monarchy comes to an end
while a republic may be permanent
(see ancient pillars or a monument).
And your Scots barons neither couldn't, no can't
think otherwise. They wouldn't relent
in pressing their quite sordid argument --
that is, that they, your Scottish lords, can't see
What makes a throne so different from a cot?
O rara avis of your century!
To your compatriots you were a slut. 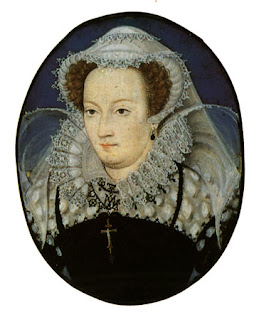 During her imprisonment at Lochleven Castle in Scotland, Mary Queen of Scots is forced to abdicate in favor of her one-year-old son, later crowned King James VI of Scotland.

On February 8, 1587, Mary Queen of Scots was beheaded for treason. Her son, King James VI of Scotland, calmly accepted his mother's execution, and upon Queen Elizabeth's death in 1603 he became king of England, Scotland, and Ireland.
Posted by Durward Discussion at 7:14 PM

Sounds like Mary had a few loose canons! Looking forward to your post on women in power tomorrow!