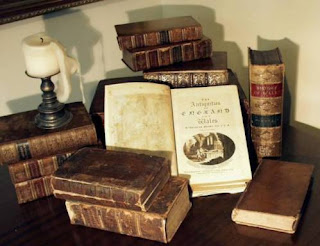 Linda over at Are We There Yet has passed along a meme for one of my great passions: Books. If you love them as much I do, feel free to steal and share your favorites. The only bad thing about this oh so individual meme is that you have to narrow it down to one book in each category. For a reader that is almost inhuman punishment, so I cheat in a couple of places, but here I go.

One book that changed your life:

The Bumper Book. It was the very first book I read all by myself the Christmas before I turned three. I was one of those fortunate children for whom those odd symbols made pictures in my head and took me to another world. Relatives learned rapidly that when I was reading, you had to shake me to get my attention because I was living somewhere else. The funniest was laying on a couch waiting for my aunt the nurse to give me a shot. When the book was finally put down, I went to ask when she was going to do it, and she answered "an hour ago".

One book that you have read more than once:

There are probably at least 50 books that I regularly reread, so a favorite is impossible. One that I always close with a smile of satisfaction is James Michner's "Hawaii". The first reading was in 1959 or 1960 when it first was published. This was the book that introduced me to stories that combined with phenominal research make true historical fiction such a constant joy and sometimes conveys a "truth" that just perusing reality never quite conveys.

One book that you would want on a desert island:

Given my technical expertise, I probably won't live long enough to get much reading done, but just to try surviving for awhile before the pretty luxury cruise ship showed up: Robinson Crusoe or The Swiss Family Robinson

One book that made you laugh:

The Hitchhiker's Guide to the Galaxy and all of its sequels by Douglas Adams. If you love tongue in cheek, quirky British humor, these are the books for you. Try not to read in crowded public places. People get very nervous around others who suddenly shriek out loud and clutch their stomachs while tears of laughter streak down their face. Read it a couple of times while indoors before you take it outside.

One book that made you cry:

Many books over the years have brought tears to my eyes when the characters who have become friends face various trials and tragedies, but the one time crying was funny was while working the all night shift as a phone company operator. After midnight the four of us would take over information as well as our usual long distance. We often got students with homework, all sorts of emergencies and the spelling challenged looking for a place or name. In the wee hours the group would chat or read waiting for the next buzz of incoming call. That is where I was the first time I read The Lord of the Rings by J. R. R. Tolkien and got to the point where Gandalf fell to his death in the clutches of the Balrog. Adult women with a home, husband, and children do not suddenly moan out loud
"Nooooooooooooooooooo!"

One book you wish you'd written:

This honor goes to Paul Scott's The Raj Quartet which is technically four books. It deals with the British raj in India from it's inception to the time of Ghandi. The people and themes still echo today in India, Pakistan, and the Muslim countries of the Middle East. You almost can't read a page without drifting to your daily newspaper for some current fall out to events back then. Plus, I would really love to go to India and these books are likely as close as I will ever get.

One book you wish had never been written:

Strangely enough none. Just as I would never want to see a book destroyed, so I would never wish even the most foul out of existence. They are all the product of the human mind in all its evil and glory. That evil or glory would exist whether or not the book ever happened and sometimes a truly horrid book can point the way to the people who need to be stopped from inflicting their poison on the world.

One book you're reading:

One book you're going to read:

I have promised myself for years that I would finally get around to all 12 novels of Anthony Powell's "A Dance to the Music of Time". That procrastination is about to come to an end as a copy of "Spring" containing the first three novels has finally entered the house and is the next work of fiction to be attacked. 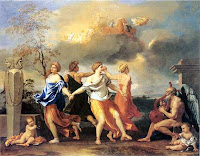 Now I am going to add one more category for comment. We often complain that the movie, mini series, or play just doesn't measure up to the book. Name a book or books where you think the transition to screen or stage was actually well done and why. With books that have more than one version (i.e. Charlie and The Chocolate Factory), which version was you favorite.
84 Charing Cross Road by Helene Hanff. The letters between two book lovers is a reader's paradise and the movie starring Anthony Hopkins and Anne Bancroft actually captures most of that joy thanks to two great actors who were able to make characters separated by 3000 miles of ocean into a love affair.
Posted by Durward Discussion at 3:29 PM

At some point in time you have to stop reading books and start thinking for yourself. - Albert Einstein.

Not to worry. There are lots of hours in the day for thinking. I can even do it while reading.

There are two books that immediately come to mind that I think were brought well to the screen.

The first is Lord of the Rings. I think it was brilliantly done in all phases. It was faithful. And where composite events or characters were done, they were effective and did not fundamental change any themes.

The second is the updated Bourne series. The three Bourne books are my favorites from Ludlum. I think that it was brought forward to the present extremely well. I had a little trouble with the camera work in the last film...it was a little abrupt and made me dizzy. But I have no argument with the films otherwise.

Very well done just as I thought it would be!

My favorite Michner book is "Chesapeake"; I absolutely loved it for many of the same reasons that you liked "Hawaii". I especially liked the intertwining story of the Canadian geese.

I adored "The Hitchhiker's Guide to the Galaxy" (which the movie was nothing like at all!). I love a good quirky British sense of humor and Douglas Adams had it in spades in those books! A friend had recommended I read them after he had tried rather futilely to explain to me "the interconnectedness of all things"!

Now as for book to movie - again I have to say that "The Five People You Meet in Heaven" was very well done. I thought that "Bridget Jones" - both of them - were quite good, and I have never seen a Stephen King booked turned into a movie that I really liked except for "Misery". Now that one was well done!

I'm also reading some about British history but in fiction: Ken Follett's Pillars of the Earth and now its sequel, World Without End. Both are very long at about a 1,000 pages each.

Books to film are difficult at best. However, the Grisham films have been fairly faithful to the books. I found the film Da Vinci Codes not to be too faithful to the book but, interestingly enough, helpful in better understanding the book, which is very unusual.

Jamie, I thought Martin Scorsese who brought "Age of Innocence"by Edith Wharton to the screen, did a magnificent job! Also recently, Lahiri's novel "The Namesake" was marvelous on screen. :)

"What Austen Character are you?" Try it at my blog Answers to the Questions

One book that
changed my life.... Walden
read more than once.... Rebecca
bring on desert island.... Catch 22
made me laugh.... Horse Heaven
made me cry.... The Sparrow
wish I'd written.... SlaughterHouse Five
wish never written... none
one I'm reading... Water for Elephants
one I'm going to read.... Breakfast With Buddha..