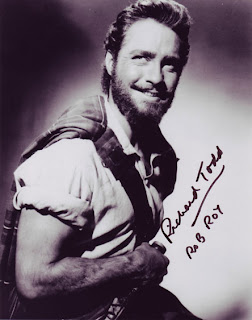 The above message arrived in my email and immediately started me down the road of every romantic movie that caused me to adore the leading man for at least two hours of my life. It started a wonderful trip down memory lane to the very first man who made me sigh and play a theme song for ages afterwards. Whistle My Love was sung by the gentleman below as Robin Adair while Robin and Marian walked through the forest.

Richard Todd was in the Disney live version of Robin Hood when I was eight years old. He went on to two more Disney films as Rob Roy and Charles Brandon in The Sword and The Rose. The dance scene with Glynis Johns would make any girlish heart beat faster. Then there was the good cry at the end of the 20th Century Fox film, A Man Called Peter. I even caught up with some great black and white films: The Hasty Heart and Dambusters. Mr. Todd set the mold. Ever since then it has been slender men with dark, slightly curly hair who looked good on a dance floor.

So who was your very first cinematic crush? Spill the beans here in comments and then tune in to the Mo Show wednesday night to share it with the world.
Posted by Durward Discussion at 8:30 AM

Good gosh, I don't know who my first crush was...there were so MANY! I was thoroughly in love with Paul Newman (and I still am!). Clint Walker was wonderful....eesh! If I sit here thinking about this, I won't get my grant application done! Why did you have to get my blood racing?? Vixen! No, wait. That's another blogger, lol!

Me? I don't know about my first cinematic crush, but I know I fell hard for Natalie Wood as Maria.

I can't remember my first cinematic crush either, but to this day I have a big thing for Jessica Rabbit. Cheers Jamie!!

I'm not bad, I was just drawn that way.

I have been pondering this since you posted it! I would have to say Clark Gable in Gone with the Wind. Such a good bad boy. On television I used to live for the show "Man from UNCLE" so I could watch Napoleon Solo (Robert Vaughn)and I hadn't even hit puberty yet!