In writing the article about "Eleanor Rigby", I mentioned the "Beatles Walk". There are several guided tours that you can take to see boyhood homes, schools, and early performance spaces of the Beatles. In addition, there is The Beatles Story a touristy but fascinating venue for all things Beatle.

One of the places on the walk is Penny Lane. Recently there was a movement to change all the names of streets in Liverpool that honored the personages and ships that had been involved in the slave trade. This was an early source of wealth for Liverpool, but the city council wanted to excise all city traces of this early history. This included renaming Penny Lane.

Fortunately, mainly through "The Beatles Story" and Beatles fans world wide, Penny lane will remain a fixture both in fact and story, but the early information about its slave trade origins will now be included in the information.

Discussion in emails also led to some wanting information about McCartney's classical music creations. The first one was "Liverpool Oratorio" that is biographical at its base. There is a wonderful PBS documentary about the means of creation since he had no background in writing scores for multiple instruments and voices. While somewhat simplistic in its melodies, the piece is quite beautiful and dramatic. It was commissioned for the 150th anniversary of the Royal Liverpool Philharmonic Orchestra and featured Kiri Te Kanawa as one of the soloists. McCartney has since followed this work with three more classical creations. We will get around to the poems and paintings later. He is a very, very busy beatle. 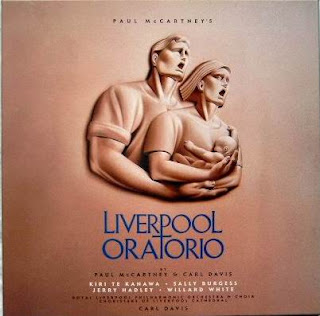 There are several articles describing or analyzing Paul McCartney's first attempt at a classical work. Among them Wikipedia, the CD Program Notes, and the Brittanica article. The work itself is available on CD and on the Great Performances debut on DVD. At the Amazon site, you will find his later classical works such as Standing Stone and Ecce Cor Meum as well.

Kiri Te Kanawa, Jerry Hadley and chorus singing "Save The Child" from The Liverpool Oratorio

Posted by Durward Discussion at 6:16 AM

Maybe some who know such things will call that simple, but to my untrained ear it was simply beautiful.

It is a stunning piece and the documentary about its creation is well worth hearing.

You've been royally tagged by the Queen of Memes. Please pass it on to as many as you'd like.
Long live the dungeon.

No Autographs, Please - The Band Meme

I just wanted to post to show off that my name is now in blue because I finally broke down and registered with the google....

ps.... John will always be my favorite Beatle...

Now we have you dressed in blue we need to convince you to actually do a blog.