You can't write about New Orleans without starting to dream about Beignets or Bananas Foster. If your New Year's Resolution had anything to do with dieting: 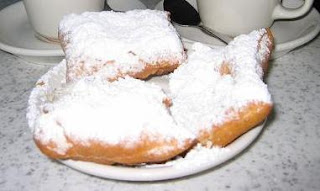 Cooking Instructions:
Pour boiling water over shortening, sugar and salt.
Add milk and let stand until warm.
Dissolve yeast n warm waater and add to milk mixture with the beaten egg.
Stir in 2 cups flour. Beat Add enough flour to make a soft dough.
Place in a greased bowl; grease top of dough, cover with waxed paper and a cloth; chill until ready to use.
Roll dough to 1/8-inch thickness.
Do not let dough rise before frying.
Cut into squares and fry, a few at a time, in deep hot fat (360 F); brown on one side, turn and brown on other.
Drain on absorbent paper.
Sprinkle with confectioners sugar.
Yields 2 1/2 dozen 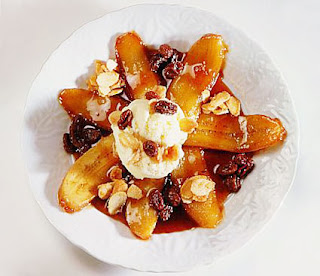 
Combine the butter, sugar, and cinnamon in a flambé pan or skillet. Place the pan over low heat either on an alcohol burner or on top of the stove, and cook, stirring, until the sugar dissolves. Stir in the banana liqueur, then place the bananas in the pan. When the banana sections soften and begin to brown, carefully add the rum. Continue to cook the sauce until the rum is hot, then tip the pan slightly to ignite the rum. When the flames subside, lift the bananas out of the pan and place four pieces over each portion of ice cream. Generously spoon warm sauce over the top of the ice cream and serve immediately.
Posted by Durward Discussion at 12:26 PM

one of my favorite desserts when I'm allowing myself an indulgence.....

Not a big fan of sweets, but Bananas Foster is da bomb. Cheers Jamie!!

darn. I looked at the beignets. and they look soooooooo good.

YUM. I remember being at Cafe DuMonde a while back (10 years!) I had the beignet just up to my mouth to take a bit and then sneezed... Yep, I was wearing black as well!