It May Take An Intervention

Yesterday was just like almost every day. The PBS channel was playing beautiful music while displaying pretty pictures. Passing by in the midst of handling laundry, I heard the words "Eleanor Rigby statue" Wha???? Statue???? One of my favorite Beatles songs has its own statue????

By now you all know what is going happen. Me and my computer are going to take one of our "gotta know everything about everything" manic trips ... but, but, but there's housework so I'll just do a simple image search and here she is: 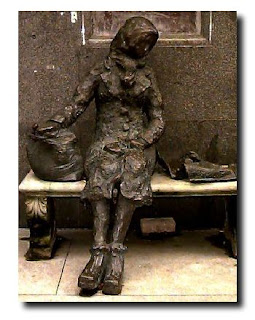 I can stop now. Right? Fat chance!!! Was the song based on the statue ... the statue on the song? Okay, I'll just look at the article about her. The sculpter's name is Tommy Steele and the rumor is that he sold her to the city for "half a sixpence". Say what?! THE Tommy Steele, British rocker, star of many musicals? One of those musicals was Half A Sixpence. Who knew? He's a sculptor?

Okay, it will only take a moment to sneak over to You Tube for "Flash, Bang, Wallop!"


Well I'll just leave you all here. There is still that matter about the objects inside the statue and all the other sites on the "Beatles Walking Tour" and, and, and ... If you don't hear from me again soon, send a rescue party.

Posted by Durward Discussion at 7:36 AM

LOL! That's the lament of any historian isn't it? Something catches your eye or your ear, and you're off on a maniacal mystery tour!

Thanks for that musical clip...I'd never seen that before.

wow...just when you think you know everything..wow...you always have the coolest stuff...how wonderful....thank you for this treat..

That's one of my fave songs as well, and I knew nothing about the statue. BTW, I have resized the Bagwine Order pic so it will fit better in your sidebar. It is over my links page. Cheers Jamie!!

Now I am most curious and can't wait for you to dig out the rest of the facts!