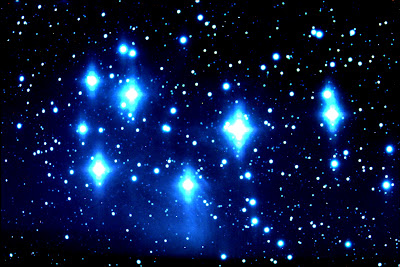 There are seven colleges/universities on the east coast of the United States that were originally founded in the 19th century for women only, though two of them are now co-educational. Their mission was to educate women to the same degree as men. These private colleges and universities continue to provide an outstanding education to women, and the list of their famous graduates is a long one.

They received the nickname of "The Seven Sisters" in the 1920s to link them in people's minds with the eight Ivy League men's colleges (now all coed). Although these highly regarded women's colleges were founded in the 19th century, it wasn't until 1978 that they all had women Presidents.

This nickname also had a classical reference to the Pleiads, the graceful and beautiful stars in the heavens.

One day the great hunter Orion saw the Pleiads as they walked through the countryside, and desired them. He pursued them for seven years, until Zeus answered their prayers for delivery and transformed them into doves, placing them among the stars. Later on, when Orion was killed, he was placed in the heavens behind the Pleiades, immortalizing the chase.

Mount Holyoke College (South Hadley, MA) - founded in 1837, this was the first of the Seven Sister schools, and the first institution of higher education for women in the U.S.

Radcliffe College (Cambridge, MA) - emerged in 1893 as an institution adjacent to, yet separate from, Harvard University. In the 1970s, the two schools merged and women were officially granted Harvard degrees.

Vassar College (Poughkeepsie, NY) - coeducational since 1969, its the first of the Seven Sisters to welcome both genders. In 1989, Rick Lazio was the first Vassar grad to be elected to Congress. However, he was defeated in a recent Senate race by a Wellesley grad (Hillary Clinton).

Wellesley College (Wellesley, MA) - Wellesley's presidents have all been women, many of them Wellesley alums. Hillary Rodham initially attracted national attention in 1969 when she became the first student to speak at commencement exercises for Wellesley.

Should you have a daughter approaching college, you might want to look into attendance at one of the seven sisters for a unique experience in education. 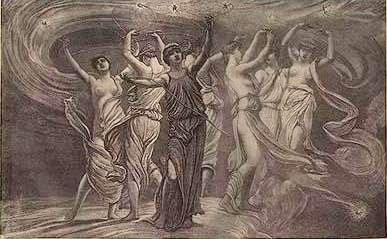 Wellesley College Tupelos In Performance
Posted by Durward Discussion at 10:53 AM

Ooooh! A reference to the Pleiades! I didn't even think of them this week! Yay for making me geek out about it!

wow, I didn't know that about the "seven sisters" especially about Radcliffe College. What a great post. Have a great week.

Very interesting ! Besides Vassar and Wellesley I didn't know the others and that they are named 7 sisters I ignored too !

Way cool post--I thought about the 'seven sisters'--great you did it.

I must confess ignorance (I do that quite frequently!). I knew about the Seven Sisters but not in relationship to the seven colleges. Being a west coast conservative, I hope you'll forgive me!

I also have something about Seven Sisters, but not the same ones, lol.

Cool.... I never heard of an all girl obedience school...BARK, BARK

Famous colleges, indeed. I enjoyed reading about them, and the Pleiades! Have a great week.

Though not mentioned, I am proud to live in a state that had the first coed colleges in the US. Oberlin College in the Ohio. Cheers Jamie!!

i never knew they were called The Seven Sisters. Thanx for the education.

Wow, such a weath of knowledge here! :)

Great job. I never knew this.

Thanks for another history lesson. Didn't know all the history here. Have a great MM :)

you always have such good info! now I want to go find the Pleiades in the night sky.

You always have the most interesting posts with so much good information! When I first saw the title I immediately though of the Pleiades but then when you started writing about the colleges I was pleasantly surprised.

Also, just checking to see if you got my request for something on The Donner Party for my non-contest contest win. I'm sure you'd do a heck of a job on that one and I have always been very interested in that part of history.

My sister is a Seven Sisters grad.

I'm lucky my parents could afford to send me to college...

I applied to go to Radcliffe, but ended up going somewhere closer to home.

Didn't get your request. Something about the Donner Party it is.

Very interesting, thank you for sharing all this great information! Happy Monday!