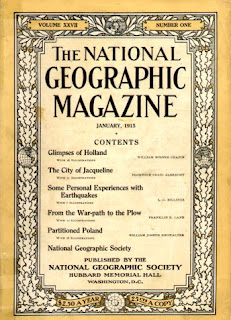 In January of 1888 the National Geographic Society was founded with the first magazine being issued in October of that year. At one time or another we have seen the brilliant yellow stripe of that which earlier generations, long before Playboy, found the opportunity to see bare breasted women in photographs. Over the past 119 years, the society has funded expeditions, performed research, and provided a passport to the world for those unable to depart for such wild adventure.

As the world has changed, so have the National Geographic Society. From that small group of 200 subscribers of the magazine, they now have a circulation of more than six million in many languages world wide and millions more through the internet and the National Geographic cable TV channel. Now it is possible for the average person to go on expedition with the society rather than one more visit to a quiet lake or simply attend one of the great Society sponsored motion pictures such as "March of the Penguins". Today you can purchase wonderful photographs, engage in coversation with other lovers of the natural sciences, Pursue the ways the environment is threatened, and follow along with arguments over discoveries and theories.

Because I can never wander too far from theater, Rag Time actually had a small vignette of the Robert Peary and Matthew Henson expedition sponsored by the Society that reached the North Pole in 1909. Enjoy the opening number to an incredible musical.

Posted by Durward Discussion at 10:08 AM

Great clip from Ragtime too. Odd that the themes playing out in today's world seem not to have changed much since 1906, as depicted in the clip.

The E. L. Doctorow book it is based on is an absolute joy to read as it puts you right into that slice of history and explores the themes that we deal with still.

That is a great publication.